We've been having a problem with paper wasps this year.  A few weeks ago I finally was stung by one (which had happened to get caught between the screen door and the actual door and I smushed it with my elbow while trying to open the door).  We've already sprayed 3 nests, removed 2 of them, and have another 3 that I've found that we probably need to spray at some point, but I'm one of those people who is like "not just live and let live, but live and HELP live" so I only ever want to remove nests if they're actively causing a problem.  All of these nests have been from the Polistes exclamans variety.  But just the other day I found the first Polistes carolina nest (Red Wasp), so I wonder if we'll see some sort of duking it out between the two types of paper wasp. 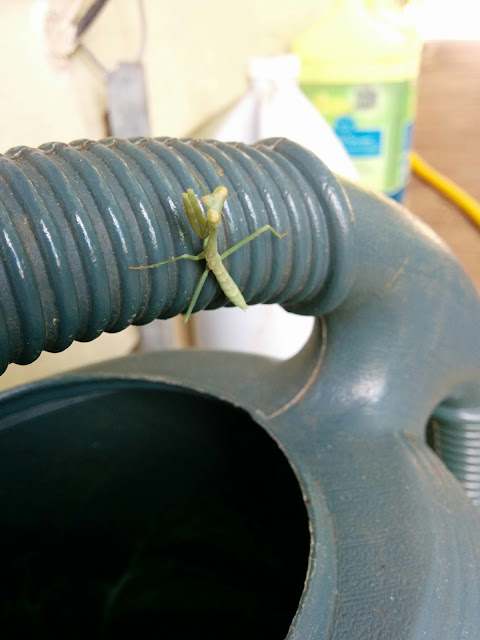 A lot of the plants in my yard may be considered invasive (like that Asiatic Jasmine and Boston Ivy that the previous owner planted), and some I've planted (like the giant petunia which some call Mexican Petunia, but others have said that it's not, and according to the Botanical Garden of Key West, it's Carolina Petunia), and still others probably should be considered invasive, but because it has a benefit it's generally okay (like passionvine). 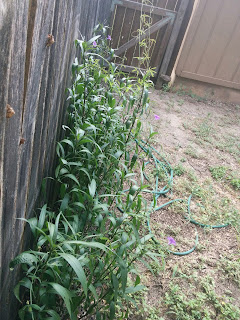 Uh Oh.  But also considering they have the hose out there I think they're actively trying to encourage the petunia/passionvine combo.
Posted by katina at 11:59 AM 2 comments:

Labels: Invasives, My Photos, Texas Native/Naturalized, what have I gotten myself into? 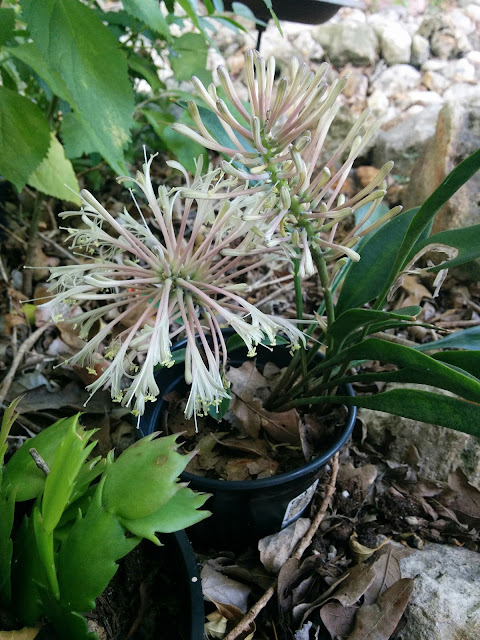 Thanks to Carol at May Dreams Gardens for hosting Bloom Day on the 15th of each Month.
Posted by katina at 12:02 PM No comments:

Fact: I have magpie tendencies and when I'm doing field work, I'll take little rocks and marbles and what have you back to the office to put on my windowsill - the last time I was out, I found a piece of armadillo shell and a vertebra, and the time before that, it was a chunk of yellow glass, and before that a blue marble, etcetera, etcetera, etcetera.

Fact: I've been teleworking at home at least one day a week, and because I'm maxed out on saving up vacation, I've been taking a day off every other week.  All this really means is that I'm not in the office nearly as much as I usually am which leaves ample time for my coworkers to put things in my office for me.  Like this ghost flamingo which was placed in my empty terrarium. 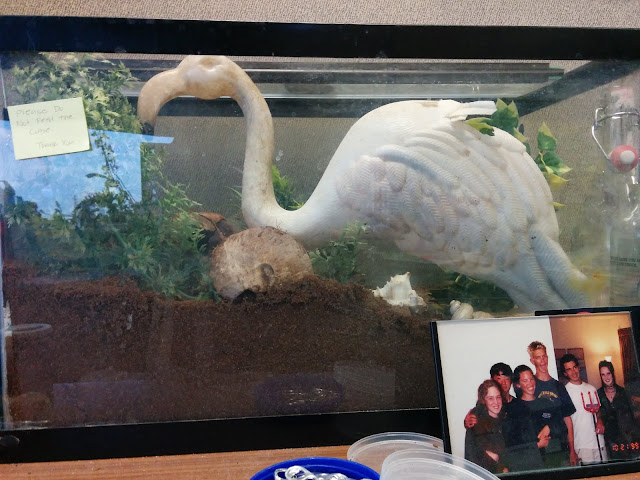 Surprisingly, no one has said anything about it needing to be removed.  Sadly, I think there are plenty of folks who would prefer this over the random bones.
Posted by katina at 12:13 PM No comments:

In Austin, we actually have two short growing seasons for tomatoes and not one long one.  There is always a period of time when the tomatoes will not set fruit - that time is when night time temperatures are above 74 degrees and day time temperatures are above 95 (or so).  There are some varieties, especially cherry tomato, that will set fruit during the hotter times of the summer, but for most it's a time to either let them die, or cut them back and nurse them through the heat hoping they'll produce in the fall.

But I like tomatoes (despite not eating them raw unless they're in salsa), and so I always want them in the garden, but I don't necessarily like nursing them along.  But I'm also cheap so I won't buy any new plants, nor will I start seed.  So what is one to do?  Take cuttings of course!

Tomato plants are actually vines and they will root along the vine where it touches ground.  You could just let your tomato plants flop all over the place (which is apparently what my grandma used to do), or you can stake them to take up less space (which is what most people do - I guess that's the difference between living on a farm and not).  Occasionally, especially during wetter weather, you'll see bumps along the stem - these bumps are not some weird Tomato STD, but are actually little aborted root nodules - when you see these, your tomato is trying to root. 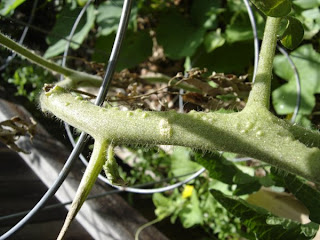 If you want any other proof that tomatoes are vines that root easily, my friend accidentally decapitated a tomato plant as she was planting it in the garden - she, being an engineer and up for a grand science experiment, planted both the bottom half (with roots and a few leaves) and the top half (the growing tip) in the garden next to each other to see what would happen.  The top part ended up being the best tomato she had in her garden that year.

So!  Tomato Propagation.  If your tomato plant needs a do-over, you can take some cuttings and plant those (it's also a good way to save tomatoes over the winter if you've got a greenhouse).

Step 2: Cut off about 4-6" of a growing tip of the vine - you can't just cut off a leaf and expect it to work, you need some actual stem and a growing tip. 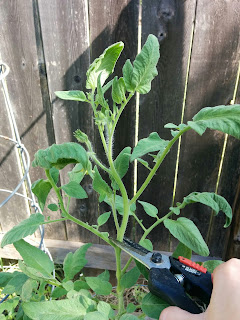 Step 3: Cut the stem at an angle and remove the bottom leaves leaving only the top two leaves. 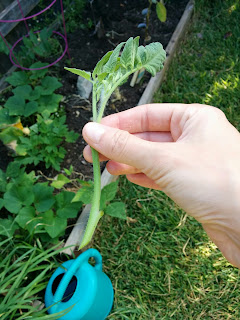 Step 4: Hold your pruners at an angle and drag it along the bottom inch or two of the stem.  Supposedly this 'bruising' helps with rooting. 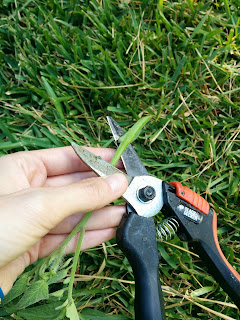 Step 5: This is the point where you would dip the cut end in rooting hormone if you have it/want it; but I've also known tomatoes to take root without the hormone - but the rooting hormone does help.

Step 6: Poke a hole in the dirt (whether that's in the garden, or in a 4" pot).  If you're using a pot, I'd recommend using cutting/seed starting mix as opposed to regular garden soil.

Step 7: Put your cutting in the hole and press the soil around the stem. 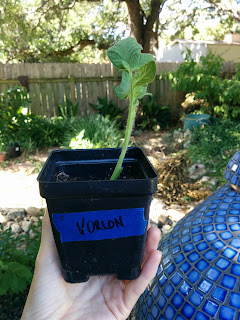 Step 10: Water daily - it would also be smart to provide shade so the poor little thing isn't having to contend with trying to grow roots and fend off the death star.

Step 11: Wait a few weeks (I noticed mine had roots after about 2 weeks; but I also use the rooting hormone)


Now then, by the time I'm getting around to writing this (August), it's already too late to really be planting tomatoes - the last weekend in July is generally the last recommended date for planting tomato transplants, BUT, now you'll know for next year.
Posted by katina at 11:48 AM 2 comments:

Labels: experiments, How I did it, My Photos, Vegetables
Newer Posts Older Posts Home
Subscribe to: Posts (Atom)