So on Bloom Day of this month (May 15), I totally took a bunch of pictures of the plants that were blooming.  Unfortunately, I lost my blogging mojo at around that time so I never posted them.  Here are a smattering with a list at the bottom of everything that was blooming.

Posted by katina at 3:27 PM No comments: 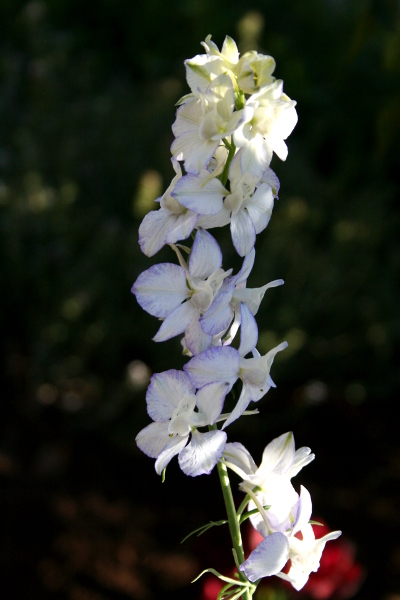 The larkspur seeds I threw out in the Rose Bed actually sprouted and are now blooming.  Yay for new flowers!
Posted by katina at 7:49 AM 4 comments:


After using 3 bags to mulch the possumhaw area, and then another 2.5 to mulch the red tip photinia bed, I decided that paying at least $2.50 a bag and having all those bags was a little ridiculous.  Enter The Natural Gardener.  The Natural Gardener sells mulch and soils in bulk.  Their most expensive mulch (Sylvan Formula) is currently $26 per half cubic yard (aka 13.5 cubic feet) with the cheapest one that you'd want to use being $16.50.  If you don't want half a cubic yard, they also sell it in "bag it yourself" bags.  If you go this route, however, the cost does increase to $3.50/bag ($35.50/half yard).  Does buying in bulk end up saving money?  Yes - but it's a negligible amount ($2.44 per big box brand bag equivalent instead of $2.50 (going for the cheap stuff on both accounts)).  So because we were tired of ripping apart bags, we opted to go get us some bulk mulch.  It was easy-peasy.  The guy loading the mulch was a pro - we didn't even have to get out of the truck AND he even levelled the top of the mulch mountain all with the little front-end loader.  We took surface roads all the way back home because mulch does get blown around.  We had the sunroof open, and we both ended up covered in mulch dust by the time we got home.

Do you have any idea how quickly half a yard of mulch will disappear when you're spreading it around the yard?  Like super quick, man.  We mulched the Rose bed, the Iris bed, and the new Betony bed.  And that used about half of the mulch.  We still have to mulch the front bed, 3 trees, and the main backyard bed.  Plus we may do the veggie garden beds (even though what I really need is more soil), and the front bed along the walk.

When we came home on Friday night, I looked out our back door and saw this: 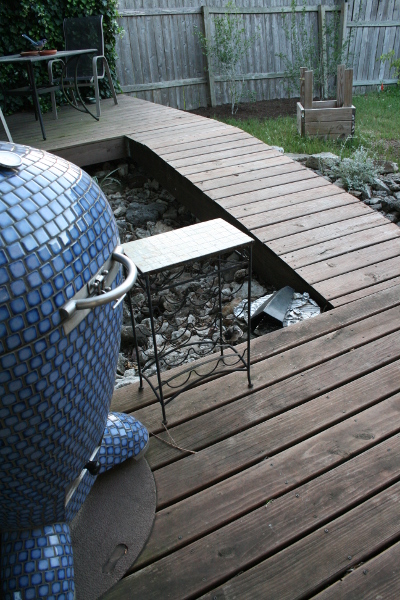 I know it's difficult to see, so what if I zoom in: 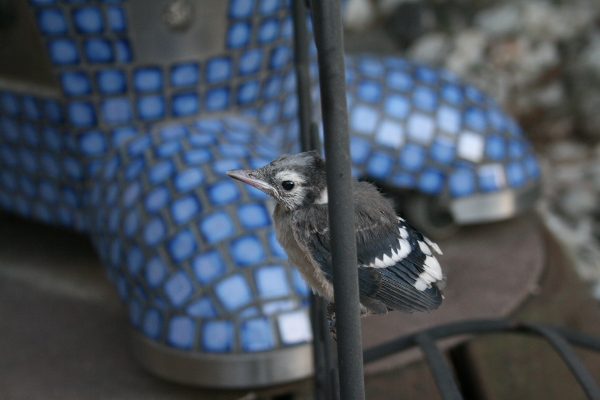 There are a few rules one should follow when dealing with baby birds.
I left the little bird alone and kept an eye out to see if any parental types came by - hoping that they would manage to get the baby flying - or at least flying enough to get to higher ground.  By 9 pm, I hadn't noticed any parents, and it was getting cold and dark; furthermore, being on a low perch when our yard is cat central is not a safe spot for a baby bird.  I made a little makeshift windbreak nest out of a cardboard box for the bird and tried to get him into it.  He would have nothing to do with it and instead perched himself on my arm. 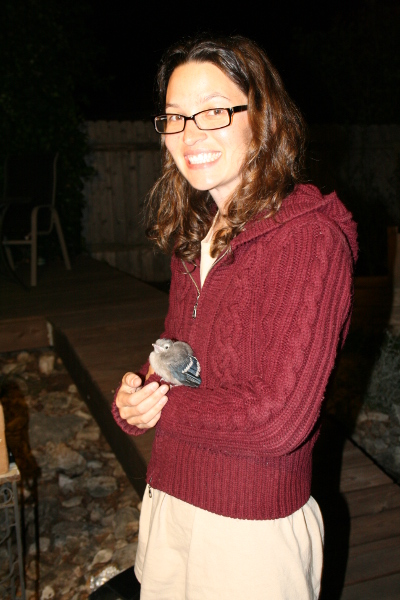 So now I had a bird on my arm with no indication that he wanted to leave.  I offered food and water (didn't want either), and then I managed to convince him over a 20 minute span of time that being on the trellis on the deck amongst the vines would be a better place for the night than my arm.

At 6:45 the next morning I got up and went to check on little Jay.  I couldn't find him, but found the pile of droppings he left behind and initially was really happy.  That is, until I noticed that my cat was gnawing on something*.  When I pulled her away from her tasty treat, I saw that it was the wing tip of a baby jay bird.  Based on the jays coming to the yard a little later, I think the mom and/or dad did find the little jay and were bringing food to it, but unfortunately one of the feral cats in the neighborhood got to it.  Sadly, one of the parents came by right after I discovered this and spent a good 10 minutes flying around looking for the missing baby - first checking the spot where he was last (in the trellis), then checking out the spot where I found him, then going back to the first spot and looking along the ground, checking both sides of the fence.


* I know my cats weren't the perpetrators since they were inside all night with me.  But yes, the cats are indoor/outdoor and I know they shouldn't be.  They usually go after lizards (both), mice/rats (Ivy), and birds who have flown into the window (also Ivy)
Posted by katina at 7:43 AM 3 comments:

Strawberry Plants:
Meh...very meh - I've seen flowers on one of the two plants, but no fruit.  I may have to give up on strawberries...or maybe they're like peas - I have to plant an entire bed of them in order to get any appreciable amount.
Experience:  Meh.  I don't know why I try to grow strawberries every year...I'd actually have to DO something in the garden in the fall if I really wanted to get some strawberries (the garlic and onions are so easy to care for, I just really should forget the plants that are fussy).

Swiss Chard:
Didn't do anything until February.  It may be the fertilizer, it may be the [very warm for this time of year] weather.
Experience:  Hit a growth spurt - not sure if it was fertilizer or the fact that we started having some cold snaps, but the plant did grow gangbusters for a while.  I've only cut off leaves once - and that was to make the feta chicken pasta with the chard instead of spinach.

Mustard Greens:
A variety of purple greens.  Came to me all flea beetle infested and I've had to fight them since.  They haven't done anything, but at least started looking healthier in February.
Experience:  Didn't really grow much, but did do a little better in March/April.  Did good enough that we were able to pull off the leaves and use them on our sandwiches.  I wasn't a fan of the "generic bitter green" flavor it imparted, but Shawn LOVED it.  As in he deemed the sandwiches good and requested that I grow mustard greens again in the future.


Snap Peas:
Didn't plant until January 26.  Doing well.
Experience:  Finally were able to harvest some peas in April. Again, not enough to actually prepare anything with them, but enough to stand out in the garden picking and eating peas.


Carrots:
Didn't plant until January 26.  Never came up.
Experience:  Didn't come up - or there may be ONE carrot.


Quinoa:
Didn't plant until January 26.  Never came up.
Experience:  Noticed in late April that there was ONE plant that came up - it's hiding behind the parsley and peas.


Garlic - all varieties I have already planted:
Didn't plant until December.  I really just planted ones that had already started sprouting.  So of course they're all growing...though not very big and beefy yet.
Experience:  Garlic is garlic, yo.  It doesn't really seem to be growing much, but then the garlic rarely does grow much.


Onions:
Onions starts I grew from seed were transplanted to the garden on January 26.  As per usual, some of the starts are doing great while others are not.
Experience:  Most have managed to pull through, but those closest to the chives are most definitely stunted.  I noticed some of the tops have started to fall over already so I'll be harvesting them soon.

Dill:
Purchased a dill plant as a replacement for the fennel plant that didn't make it through the winter - it was just always covered in aphids.  The dill is doing well, and even has a caterpillar on it (and some ladybug eggs).  Unfortunately, it looks like it is also covered in aphids now because it's starting to get warm.  I should clip some leaves and make the dill dinner rolls then resign myself to the fact that it is for the caterpillars.


Holdovers from last year:
Lemon Balm:  Still in a mat-like state, but they were never damaged by the weather (not that we really had any cold weather).
Experience:  Starting to grow back into a mound form.  The one on the west side of the bed has migrated over the years.

Garlic Chives:  Died back to the roots which is surprising considering we didn't have all that cold of weather this winter.  The large plant has come back with a vengeance.

Summer Thyme:  Never died back.  Will need to be cut back to prevent legginess.
Experience:  Didn't cut back like I said I would because it started blooming.  And then the bees came and it was glorious.

Oregano:  Did wonderfully - lush and green.  I'll have to start clipping it soon.

Parsley:  As per usual - just seeded all over.
Experience:  The garden and the front yard are CRAZY with the parsley.  This year almost all of the plants are in the planting beds which is good, but the bad part is that they're all taking over the beds.  They just started blooming and the bees and ladybugs are going beserk.  Obviously we won't be removing them for a while...

In case it isn't patently obvious, I really need to start a "just the herbs" bed.  It would clear out large amounts of my regular garden bed and then maybe I can go back to having a normal garden (that is - tomatoes in the garden).