Oh, how true it is

Article from Slate.com about Gardens in Movies.
Posted by katina at 1:03 PM No comments: 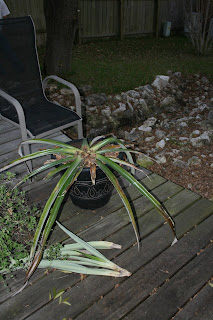 I'm not exactly positive about what finally did the plant in, but I think it was a combination of the wind storm at the end of November and me bringing it inside (after the wind storm) because the temps got below freezing a couple of nights. I left the pineapple and the oregano in the house until the week before Christmas. I only put them back outside because of the chance of above freezing temps through the rest of the month. While I was restoring the plant to its normal position on the deck, I decided I should 'straighten' it as the wind storm had bent the plant to the side. That is when the top half of the pineapple just came off in my hand.

It was a sad, sad day. Especially since the plant was supposed to bloom this summer and perhaps even give us a pineapple.

Also, because of the freezing temps, the watermelon died, and the tomato finally died, as did the pepper plants. The lantana plants went dormant for the winter and all of the what-ever-the-red-wild-flowers-are died as well (they should have re-seeded themselves though).
Posted by katina at 10:29 PM 1 comment: