A difference in Peppers 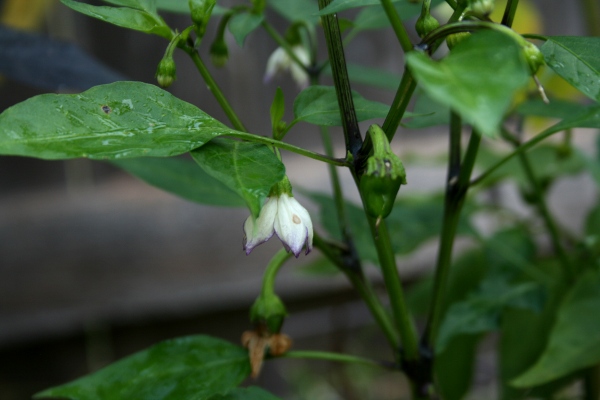 The "Green" black jalapeno plant - the leaves are green, the flowers are white with purple fringe and the peppers start green, fade to black and ripen to red. 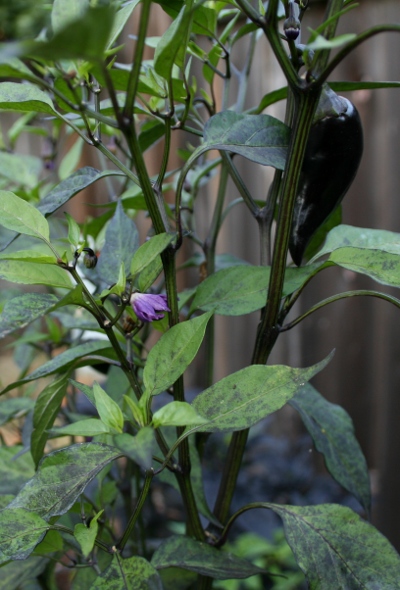 The "purple" black jalapeno plant - the leaves are purple mottled, the flowers are purple, and the pepper start black and ripen to red.

I love doing first generation plants - both of these came from seed from one black jalapeno.  SO AWESOME!
Posted by katina at 9:57 PM 2 comments: 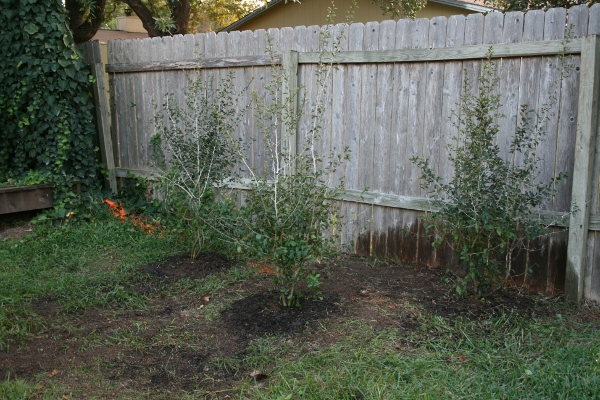 Possumhaw Holly bushes along the fenceline.
Posted by katina at 6:05 PM 2 comments:

A day late, a dollar short

As per usual, I'm running behind.  Very behind.  Like even further behind than last year...or the year before.  And 2010 is when I took the PE exam and didn't have time to garden until early November.

At the Inside Austin Garden tour, I bought mustard greens (I don't really know why - it's not like we eat them), Swiss chard, Mexican Mint Marigold (again, it's not like we ever use tarragon), and some strawberries.  I just planted all of these things yesterday.  I also planted a bunch of other plants I've had sitting around for a while (standing cypress, salvia, dwarf lion's tail, lavender - another plant that I've never used for anything, and a purple chile pequin I found at HEB during the summer).

Last weekend I finally weeded the garden - that was quite the undertaking since I have let the frogfruit get out of control.  Then, naturally, the problem is "where do I put all this frogfruit? It's not like I can just throw it in the compost bin." So around the yard I went planting frogfruit.

Yesterday I finally pulled the habanero (FINALLY! I have successfully grown a habanero plant), the ginger in the grow box, and a giant Thai basil plant.  Today I pulled out the regular sweet basil plant.  I'm torn on what to do about my smaller pepper plants (Aji, Aurora, and some other sweet pepper variety) - they're small enough that I think I can dig them up and overwinter them, but I'm postponing it until after pepper harvest...which is hopefully before the freeze date.

I planned on pulling the tomato plant, but my husband managed to get a stay of execution.  He wants the 2 tomatoes that are on the plant.  The plant is very sad.  If it weren't already dark out, I'd get a picture for you.  It looks really sad.  Here, I drew a picture: 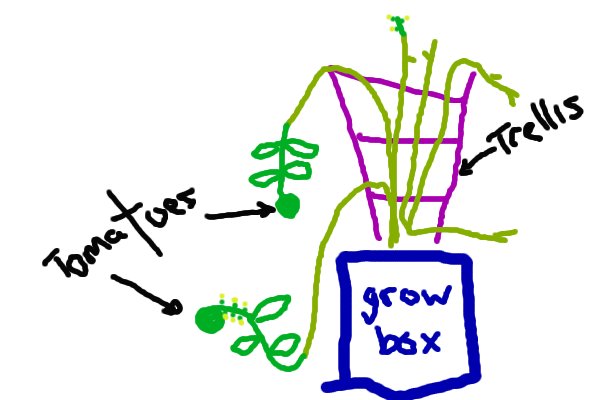 Yes, I know the tomato plant apparently changes type (opposite/alternate).  Also, the plant is not a potato leaved variety. This is meant to show what the plant looks like, health-wise, not how the plant looks actual-wise.

I also need to pull out the black jalapeno plants - actually I need to do another post on the end result of the plants since the darker one finally started producing peppers.  Though tonight will be the first time we've tried any of them.  And the eggplant is languishing...actually I really should pull it before it goes and starts producing something again...

Now - off to write a season roundup type post... yes...how odd.  A season roundup post on a season where "i didn't have a garden."
Posted by katina at 6:04 PM 2 comments:

Planting a bush in 5 Steps

Step 2:  Dig your hole being careful around lines.  your hole should be at least 2x wider than your plant pot 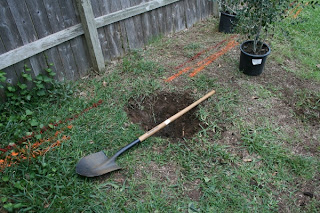 Step 3:  Measure the depth of the hole - this can be accomplished by laying a tool handle across the hole and then using a different tool to ascertain the depth (either another tool handle or a measuring tape) 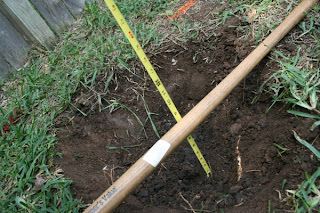 Step 4:  Measure the depth of your plant root ball.  You want your hole depth to be the same depth - never deeper, but you can go a smidge shallower.  If you look at the embiggened picture above and below - you'll see there's a 2" difference... I left the two inch difference because I tend to be hard on plants when I'm planting them and remove a bunch of the wood chips that bushes/trees are inevitably packed in. 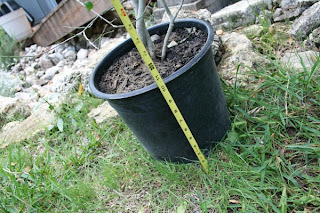 Step 5:  Remove the plant from the pot, make sure to cut any roots that are starting to go around the root ball.  Place the plant in the hole and start to fill in some dirt.  When about halfway filled, fill the hole with water.  Finish filling in the rest of the dirt and make sure to water well.  I usually will also fill the hole with water and let it drain before placing the plant. Trees and bushes will need additional water for at least one year. 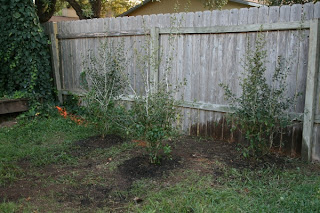