I got the idea for infusions from my friend and fellow blogger, Vicki at Playin' Outside when she presented about her vinegar infusions at a garden tour a few years ago.  Vicki said that she uses 'seasoned rice vinegar' which has some sugar in it to cut the acidity of vinegar, but if you're going to use straight vinegar, you should use rice or white wine vinegar (avoid the regular white distilled or cider vinegars because they're just too astringent).  She also said that she doesn't have recipes (which is always the first thing people ask for); her recommendation was to walk around your garden and pluck some herbs, hold them together and sniff - if they smell good together, you're good to go, if they don't, figure out which one is the offending one and toss it out.  Of course, you generally can go off of known good combos - Italian herbs (oregano, basil, parsley, thyme, sage), Mexican herbs (oregano, peppers, garlic), French herbs (rosemary, thyme, bay leaf) - generally if you use the herbs together in a recipe, they're probably going to go well together for an infusion, so go find your favorite recipe and add the same ratio of herbs to vinegar and have a go at an infusion.

But first, let's talk about the set up for infusions.  What you'll need:

And now for the photos:


I tend to use vinegar infusions as a finisher for sautéed summer squash, roasted Brussels sprouts, and making homemade salad dressing (which consists of herbed vinegar and olive oil).  The one above also gets used on breakfast potatoes when they need a little extra kick.

When using other liquids, choose good quality ones - in the case of liquors, choose ones that you would actually drink - so don't cheap out on the vodka and get the one that burns like paint thinner just to save a few bucks. 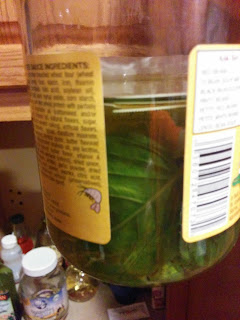 Lemon peel in Deep Eddy vodka (taken a few days after I started): 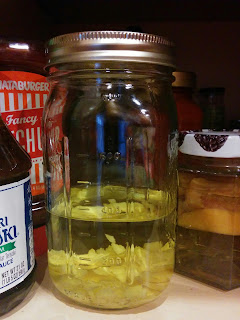 And peaches in Deep Eddy vodka (taken a few days after I started): 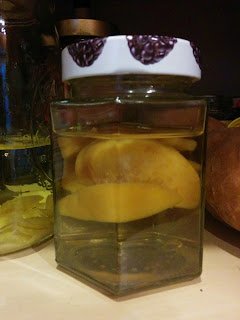 In the case of vodka infusions, I've had coworkers who have done fennel, corn (surprisingly good), cucumber, raspberry, strawberry, and blackberry.  In all cases, it works best if, after a few days, you taste test the infusion to see if it's got the flavor you were aiming for.  In any case, you probably don't want to leave the items in the vodka indefinitely.  Besides, how are you supposed to eat those delicious vodka-soaked fruit on ice cream if you leave them IN the vodka?
Posted by katina at 4:38 PM 1 comment:

Labels: experiments, Garlic, Herbs, How I did it, My Photos, Other Garden Bloggers

The last garden I planned on visiting was the Ferguson Garden.  Ms. Ferguson actually lives down the street from Tina of My Gardener Says.  Tina's yard was supposed to be on the tour, but due to a family emergency she postponed until next year (so don't miss it!).  Ms. Ferguson has SO many plants in her yard - it's very cottage-y, and it's something that I actually really like.  My husband tends to claim that he likes the cottage garden look, but he really doesn't because it's too messy for his tastes.  In any case, I LOVED Ms. Ferguson's garden and I loved talking to her about it (especially with her wonderful British accent)


Ms. Ferguson actually convinced me to head around the corner to the Williams garden (since I still had 10 minutes left in the tour time), it really doesn't take much to convince me to see another garden, though.  In any case, it was at the Williams garden that I met Lacey and Neil - two recent transplants to the Austin Area from Wisconsin.  Lacey is a teacher (speech if I remember correctly), and Neil does computer stuff.  They are one cool couple, and I hope to see them again at other garden tour-y type stuff. 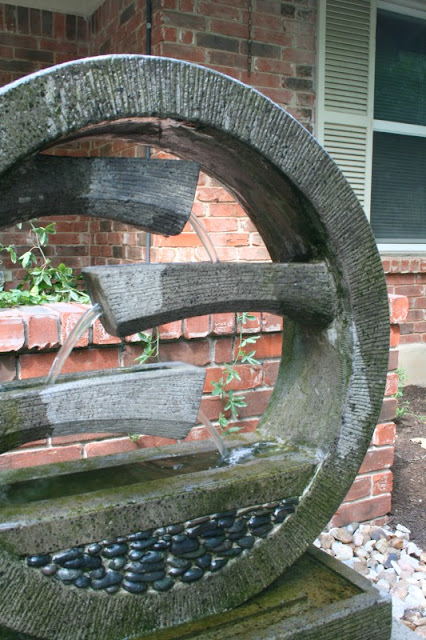 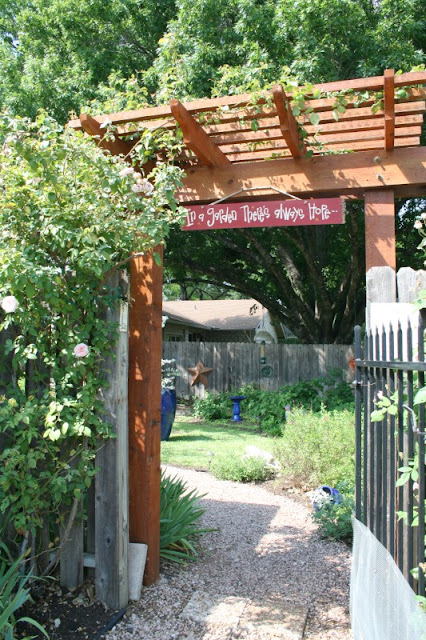 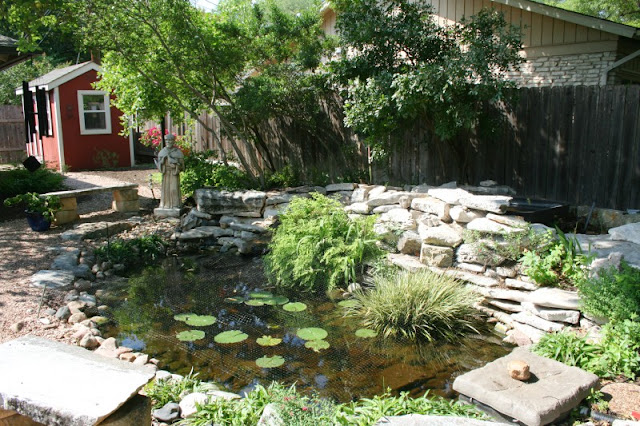 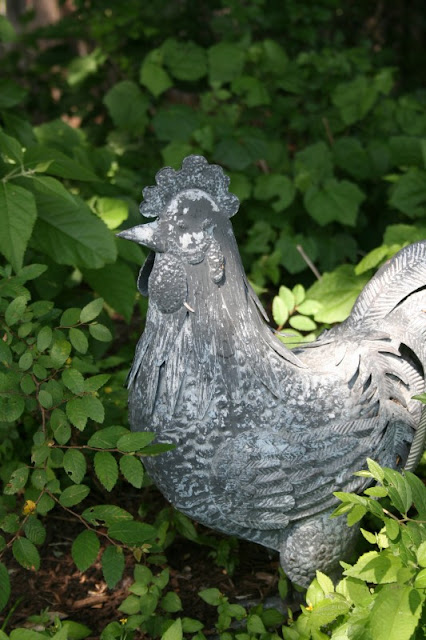 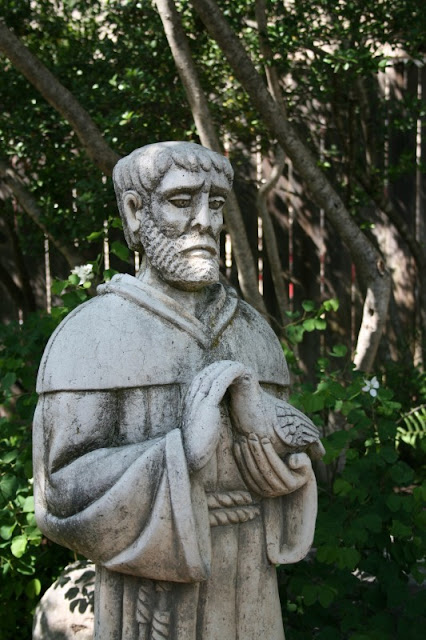 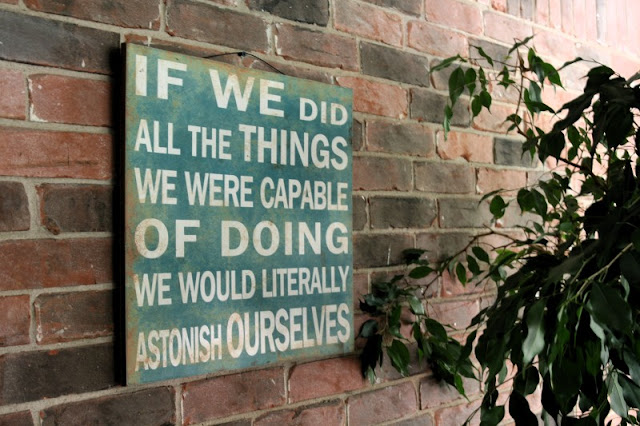 
The Willis garden was another (mostly) Art stop - but this one was actually specializing in art FOR the garden.  This is more like what I was expecting for the tour when I thought it was Art in the Garden.  The artists here were Belinda Willis (www.kissedbyfirepottery.com), Jeannette Hargreaves, and Heidi Lowell (Etsy Store)

After the Willis garden, I headed to the Hall garden.  Here, artwork by Rachel Sellars (www.artworkbyrachelsellars.com) was displayed along the fence.  Can I just take a minute to say how much I like artwork shown like this - I don't know what it is, I just like it. 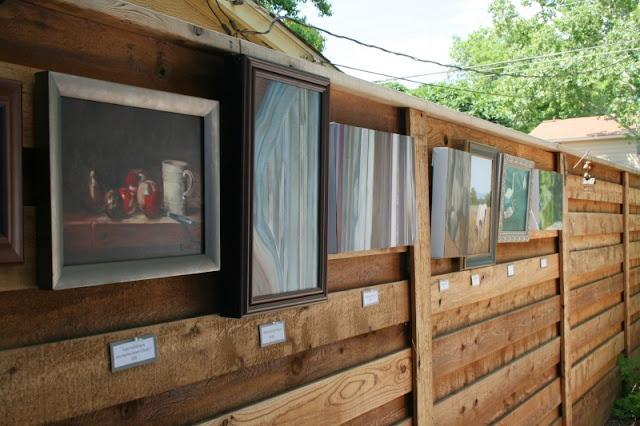 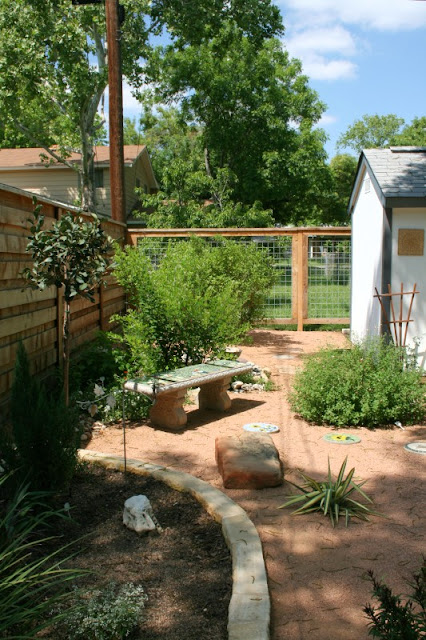 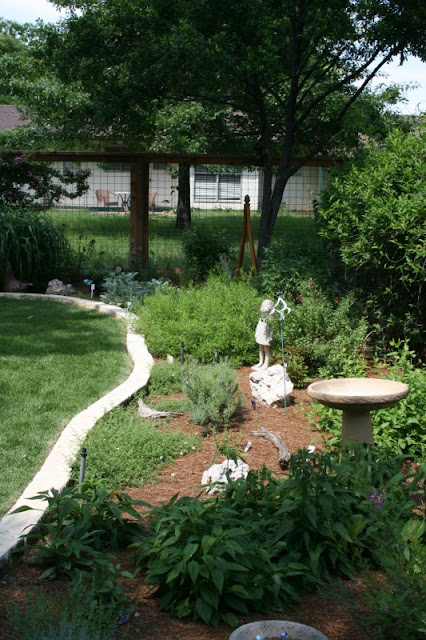 Posted by katina at 9:32 PM No comments:

Heather has an agave, named Agnes, who was gifted to her as a house warming present.  Agnes is an Agave Desmatiana.  Agnes is planted in the ground.  For those of you in the Austin area and who are into the spikey plants, you already know that Desmatianas aren't hardy down here.  Heather said that Agnes gets all tucked in whenever it's cold with Christmas lights and the whole shebang just to make sure she's happy through the winter.  I didn't take any photos of Agnes.  I don't really know why.

Heather was the only one I noticed on the tour who had before and after photos of the yard - it's always amazing to me to see the transformations these yards have gone through.