Fall Garden In and Mulched

I planted the fall garden a few weeks back. And I went out and mulched it yesterday in preparation for an upcoming trip out of town (I feel bad about asking the neighbor, who is already watching the cats, to also water the garden for me). So far nothing has really grown (which is kinda how fall gardening goes down here...a whole lotta waiting going on).

All garlic varieties did sprout (though variety 1 (Burgundy) only has 2 out of 5 actually growing). The quinoa seems to be growing, but the plants are just so piddly, it makes me think that I should really try this again in the spring to see if it grows any quicker (it really should since it's an amaranth). The spinach never germinated, and I think I killed off the chard and beets by not watering enough. Oddly, this lack of water didn't kill off the carrots (I tend to think of carrots as some wimpy little plants, but they are proving to be tougher than I expected/remembered).

On the spring garden front, the tomato plants all have little tomatoes on them, the green bean plant is going crazy again so I had to cut it back otherwise it would have taken over my Purple Cherokee. The bell peppers finally have some peppers on them. The only plants that aren't producing are the eggplant, the habanero (though it does have tons of flowers), and the yellow hot pepper plant. I think I'll be pulling the eggplant when i get back from vacation as I doubt anything starting now will be able to be very big by the time I have to pull it because of a hard freeze, and while last year, it worked out okay, that was probably because the plant had 8 eggplants on it when we had that freeze.
Posted by katina at 6:09 PM 1 comment: 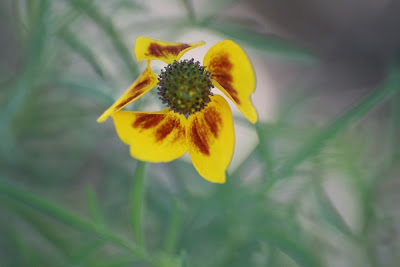 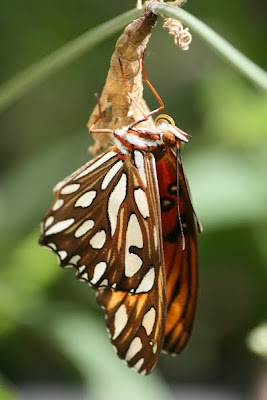 As I planted 7 varieties this year (5 I ordered, 2 are from last year's stock), I used plastic cups I've obtained over the years, mostly from Clear Springs, Rudy's and the Oasis to keep all the varieties separate.

I planted the garlic in rows instead of in squares (hopefully this will make it easier for me in the spring when I start planting stuff), and they are numbered from right to left, with blue zip tie markers at the beginning of each row (once they're growing, the zip tie markers won't be needed).

Garlics 4, 5, and 7 are essentially only half rows as I already had other things planted in the second half (that means there are only 3 plants per row instead of 5).

As of today, all of the varieties have sprouted except for the Burgundy and the Inchelium Red.
Posted by katina at 4:03 PM 1 comment:

As I didn't think I could replant the garlic I had last year (something I had in my head about cloves could only be smaller than what the parent clove was, which I don't think is necessarily the case--that's the case with pineapple, though), I went ahead and ordered another 2 pounds of garlic for planting from Gourmet Garlic Gardens. I also have some seaweed solution stuff so I'm going to add that to the soaking wash tonight. I'll likely have left over garlic again this year so if you want to try growing it, let me know.

The varieties for this year are thusly:

I will also be planting some that I grew last year: 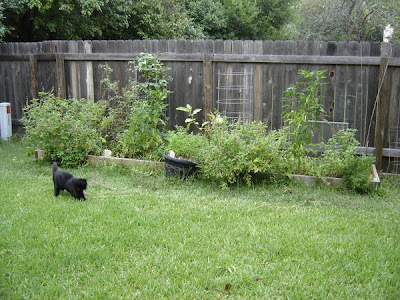 The beds are overrun with basil and lemon balm. The cat is my other cat (Quazi), he never is in any of my garden pictures because he's always much more concerned about hunting things (things he rarely catches since we all know that Ivy is the real hunter between the two). 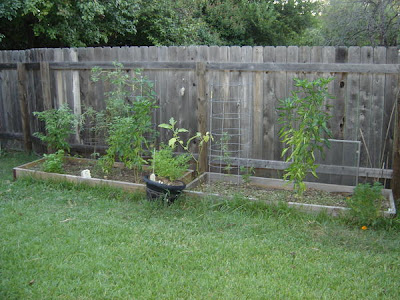 All basil plants removed, lemon balm cut WAY back, and all parsley pulled out of the bed on the left (I don't know how I got so much parsley in that bed in the first place--I didn't even PLANT parsley this year. When I was planting the left bed in March, I was planting the garden while my mother in law was pulling the weeds out of the lawn; at one point she asked if I knew what the weed was that looked and smelled like parsley that was everywhere in the yard. I told it her WAS parsley and she was surprised. I guess it's one of those things that she was only expecting to find it in the garden beds and was surprised it wasn't where it should have been. I could have pulled all of it out as it was growing, but opted against it since it acted like mulch and I ended up chopping it up and putting it back in the garden bed to act like green manure.

Today's projects:
Clean the kitchen and bathrooms
Add more soil and compost to the bed on the right
Add more compost to the bed on the left
Add more compost/mulch to the potatoes (and think about adding another level of boards)
Plant the cauliflower and broccoli starts
Start the garlic soaking overnight and plant that tomorrow morning
Plant plants I picked up last weekend
Plant some seeds (staggered throughout october and november)
and finally, move the passion vines to a different location.