When to plant: When you're sick

As I've been sick since Thursday with some nasty coughing up a lung disease, I naturally started suffering from cabin fever today. So I decided that the perfect cure was to plant a bunch of marigolds I bought a few weeks ago for 50 cents a 6-pack.

And man, did that tucker me out.

But I now have all the marigolds planted, and I also went a bit crazy with spreading out seeds that I was supposed to plant in October instead of February, but they're also like 5 years old so I figure it probably doesn't matter much either way.

I also planted more quinoa in the garden (and some poppies and some lemon mint).

OH! AND I transplanted some torch tithonia seedlings which I started in January into 4" pots. I also watered everything that I transplanted with seaweed emulsion.
Posted by katina at 3:56 PM 1 comment:

Second Round of Hard Freezes

After last week's round of multiple days of below freezing weather, I figured that was going to be it for the year. But no, I was wrong. Instead we had another round of night time temps in the teens and not warming up until the middle of the afternoon.

After this last round, my Americana Variegata agave is likely a goner and the broccoli is toast. The onions aren't looking so good, but I'll give them a day or two to recover before writing them off.

I haven't had the heart to go out and REALLY look at what's done in and what isn't. The agaves don't look good, that's for sure. The society garlic isn't looking so hot. The fennel and peas are done for. The shrimp plant, oregano, and cedar sage have finally blackened. 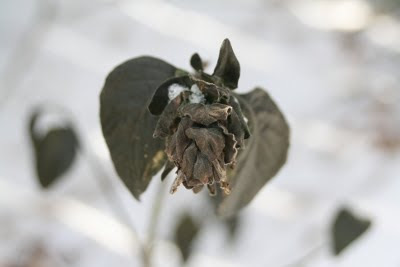 Shrimp plant. This plant managed to make it through the previous freezes no problem - really it seemed like the wind is what did it in.
On the other hand, the garlic, onions, and broccoli look fairly unaffected. The rock rose and artemisia don't seem to even have known there was some seriously cold weather (for Austin).

My favorite part about having snowfall of less than an inch is how it melts once the sun hits it. Of course, my kitchen thermometer also tried to tell me it was 117 degrees out...I'm pretty sure that it's broken, though. 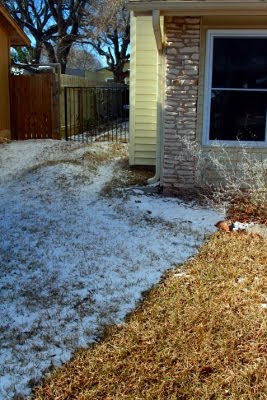 To tide you over while I get pictures loaded...

"When weeding, the best way to make sure you are removing a weed and not a valuable plant is to pull on it. If it comes out of the ground easily, it is a valuable plant." Author Unknown
Posted by katina at 12:27 PM 2 comments:

One of my friends from high school wanted to know what its called when it's raining ice. Ice storms aren't all that common in Colorado - There's usually your blizzard, the snow storm, the flurry, sleeting, hailing and raining. There is rarely ever any raining ice (well, I guess hail is technically raining ice, but those are large ice chunks, not the small rain drop sized ice). Hence, "ricing".

It was COLD today. Bright, sunny, and 30 degrees. That's Colorado weather, right there (especially when you add in the fact that it was 78 the day before). The only way it could have possibly been even more like Colorado weather would be if it had been sunny and 60 at 9 am but 30 and snowing by 2pm.

To show you how cold it was when I came home (27, by the way), here is a picture of a drop of water on my broccoli plant: 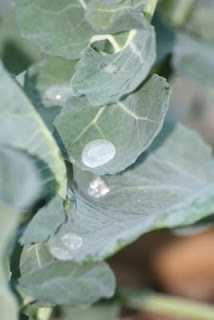 THAT, ladies and gents, is a drop of ice. Also, the plant, it is hard, and snappy. Not a good sign.

In similar news, I had to put the grill cover back on the grill this afternoon (as it blew off last night), and there was some water that was pooled in some of the recessed areas. That water fell onto the deck and was frozen not 5 minutes later.

I went ahead and covered the onions and garlic in the garden with some sheets, but it's likely not going to do a whole bunch of good (though I guess it's better that the plants be at 20 instead of 17)...
Posted by katina at 6:03 PM 3 comments: