So it's February.  There is very little blooming.  in fact, the only things blooming are the Henbit and my cacuts.

I've contacted my cousin to get some custom flower pots made for my growing cactus and succulent selection.  In the meantime, I'm just appreciating the cactus flowers from my little Mammillaria weingartiana.  This little cactus has been blooming non-stop for almost a month.  Right now it actually has 3 open flowers, this is just an older photo - a photo from BEFORE I accidentally pulled it out of its little pot with my winter scarf.  Note: Winter scarves and cacti do not mix well. 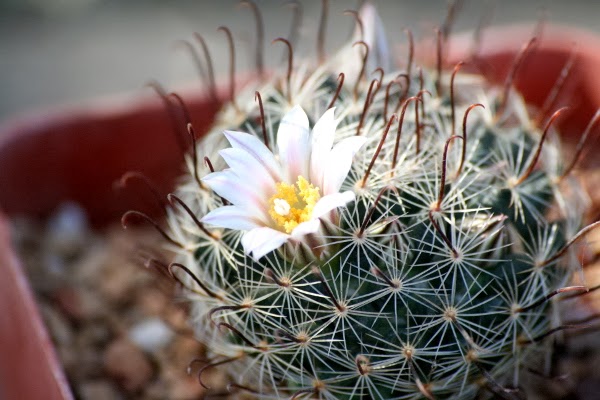 I have spent time in the yard every weekend since the beginning of the year.  Whether it's grass removal, planting (now's the time to plant roses!), pruning (now's the time to be pruning the crepe myrtles), cutting back of the vines, or pulling weeds.  It's been CRAZY out there.  And, sadly, the yard doesn't necessarily look any better.  But it's one of those things that just needs to be done and it will make the yard look way nicer in the summer when things are actually growing.  Of course, all the work in the yard means that other things are falling by the wayside - the house really could stand to be cleaned, the litterboxes should be switched out, and so on and so forth.  But I'm sure all that can be rectified a little later - you know, like during the time when it's horrendous outside and I won't want to go out to do yard work.
Posted by katina at 9:15 PM 2 comments:

So I sowed those little lettuce and spinach seeds and I dutifully went out and watered everything every day and the day came and went where I was supposed to see seedlings, and I kept on watering and hoping and what have you.*  And then I gave up and decided to start a little INDOOR bed of lettuces and spinaches.

I accomplished this feat by reusing one of those large containers that spinach comes in at the store.  I slashed a few holes in the bottom, I put a layer of coarse sand, and then in went the dirt, then some worm castings and finally some seed starter mix.  I watered the dirt and then pressed some seeds into the seed starter mix.  I then covered the bin by putting the lid on it and set it on my kitchen table.

I then promptly forgot about the damn thing.

A few days later I was like "oh yeah, I should probably see if it needs more water."  More water it did not need.  When I pulled the lid off, I was dismayed to see that while I had a bunch of sprouts, I also had a bunch of mold.

After a quick Google Search, I figured it was probably damping off (or was going to be turning into that very quickly), and the recommended solutions are to set up a fan to allow airflow around the seedlings (I didn't really want to go looking for one of our fans), poking some holes/messing with the dirt to get more air into the soil (yeah, that sounds like a brilliant idea with seedlings that are really just sproutlings), or spraying everything with hydrogen peroxide (huh, well, I guess that could work).

Choosing the easiest option at the time, I went with the hydrogen peroxide.  If you remember high school chemistry, hydrogen peroxide is 2 hydrogens and 2 oxygens.  It breaks down pretty quickly into water and oxygen.  So I sprayed everything with the H2O2, left the lid off and went to bed for the night.

I'll be damned if that didn't clear up everything by the next morning.  The next day I thought I had dreamed the mold since everything looked good and dandy.  I continued to spray everything with the peroxide for the next couple of days, but now I'm just back to spraying with regular water (and obviously leaving the lid off since most of the seeds sprouted).

* Now, of course, the outside seeds have finally decided to sprout - though only in the actual garden bed, I think the ones in by the artichoke gave up because the squirrels kept digging in the soil.
Posted by katina at 6:16 AM 1 comment:

Labels: garden pests, Growing Season 2014, information, nerd stuff, Vegetables, what have I gotten myself into?

At the beginning of each month, we join Heather at Xericstyle in posting wide angle photos of our yards.

We will begin again with a photo of the front of the house: 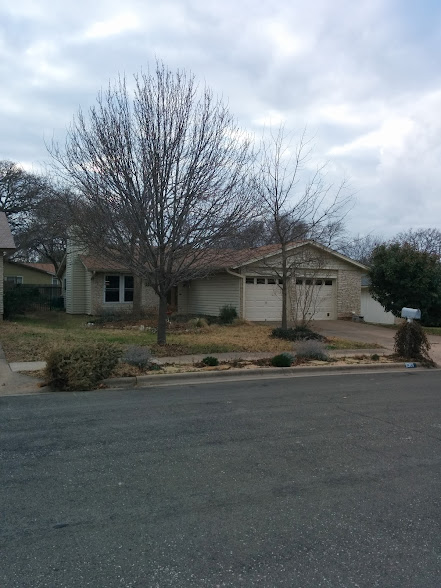 Okay, okay, even with the wide angle, it's hard to see anything, so here's a close up of the front bed.  It's looking pretty pitiful.  I also don't know if the agave will make it. 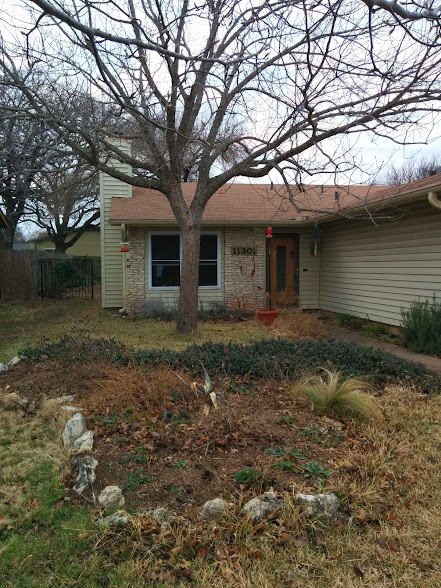 Next we will move into the panoramic of the back side yard.  There isn't much difference, but I did remove the dead Philippine Violet and the (potentially not) dead Firespike.  It looks like there is a lot less stuff because the Shrimp Plant has finally been completely defoliated due to the hard freezes we've had.

Continuing on, we get to the panoramic from the back door.  I don't know if you can even see in the previous panoramic, but I did remove a Nandina bush that was in the back corner.  YAY!

Yesterday when I decided I really ought to take the wide angle photos for February, I was in the middle of planting my Caldwell Pink Rose - a tiny little 4" pot that I bought on a whim at Barton Springs Nursery.  Of course, that was also like last February.  In any case, it's planted now - but DAMN that thing had a huge taproot - the root went out the bottom of the container and down deeper than a foot (that was as far as I could dig down and it was not giving up).  You can also see the trellises that Bob made for me against the fence.  The grass removal project is almost done/just getting started, depending on how you look at it.  All the St. Augustine grass has been removed (which was the majority of the area), but now we have some patches of Bermuda grass to get rid of. 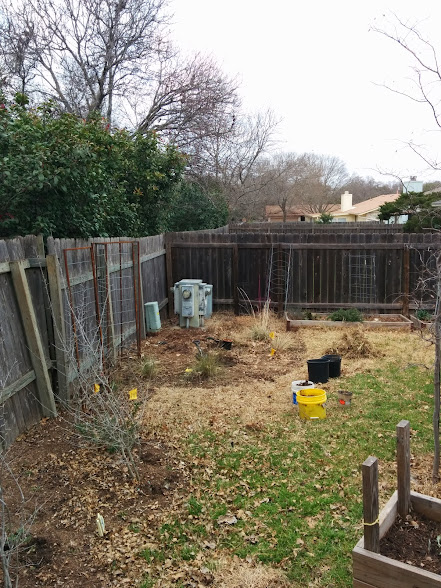 Posted by katina at 1:47 PM No comments: