They get me, they really get me.

I love my family.  I mean, they're my family, I have to love them; but also, they get me.  Even though they may not understand all my gardening desires, they'll humor me.

For example - 'why would you want to attract bugs?  but whatever, she's got "bug house" on her list, so a bug house it is.'

Also, Ollas - now Ollas are something that's been on my list for YEARS and I finally made some homemade ones during the summer.  They've been working great, but it'll be even better to have these two so that I can see which type work better (always with the science experiments with this one).  It also would mean that I probably wouldn't ever have to surface water since I'll be able to have 2 ollas in each garden (one homemade and one official).

And that's not where it stops - oh no!  my sister got me the 20-30 something Garden Guide by Dee Nash.  She also got me a seed subscription to Grow Journey, and they've already sent me my first shipment of seeds which was the impetus to FINALLY build my seed growing lamp set up and get some mini greenhouse seed starting things so maybe I'll actually finally be able to grow some tomatoes from seed. 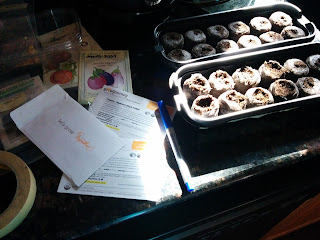 The toughest part about getting seed starter set up going was wiring the light - I bought a fluorescent light which is supposed to be hardwired into the ceiling and used an old computer power cable to convert it into a plug in light (or rather Shawn did it because he was worried I was going to electrocute myself).  Of course I needed to get the plug into the housing and the light was very industrial and had little punchouts on it, but I couldn't get the little thing punched out and ended up bending it which then meant that Shawn had to bend it back into place.  And then I had to figure out how to hang the darn thing from the shelf.  In the end it probably took longer than it needed to - and may have been worth the extra $30 to buy the ACTUAL grow light or a terrarium light that already is a plug-in. Oh well, at least doing it this way was a good way to spend 2 hours on a Saturday.
Posted by katina at 12:00 PM 2 comments: