Heads up everyone: Gardening Gone Wild's photo competition for October is one that you can start on now--it's all about creating a photo by putting things on your scanner bed and then scanning them to make a picture. YEAH...they explain it much better on their website here: http://www.gardeninggonewild.com/?p=12809

Posted by katina at 7:47 PM No comments:

I pulled out 5 of the 8 tomato plants (the Lemon Boy, Green Zebras, and one of the cherry tomatoes had to go). They were looking mighty sorry and the leaf footed bugs and stink bugs were going after all the fruit--the tomato plants that are staying look pretty healthy and only had 1 tomato between the three of them, a tomato which I went and picked today even though it's not completely ripe yet--I just couldn't bear to let the stink bugs get the ONLY Ananas Noire tomato I had.

I was going to plant the other green zebra and Ananas Noire cutting I had in their place, but now I'm re-thinking it. I'll probably still plant the Ananas Noire because I have it, but I will just give the rest of the green zebras away.

Instead I think I'll plant the ancient zucchini and yellow squash seeds I have--if they don't come up, not that big of a deal since I wasn't planning on planting summer squash, and if they do then maybe we'll have some summer squash.
Posted by katina at 12:45 PM 3 comments: 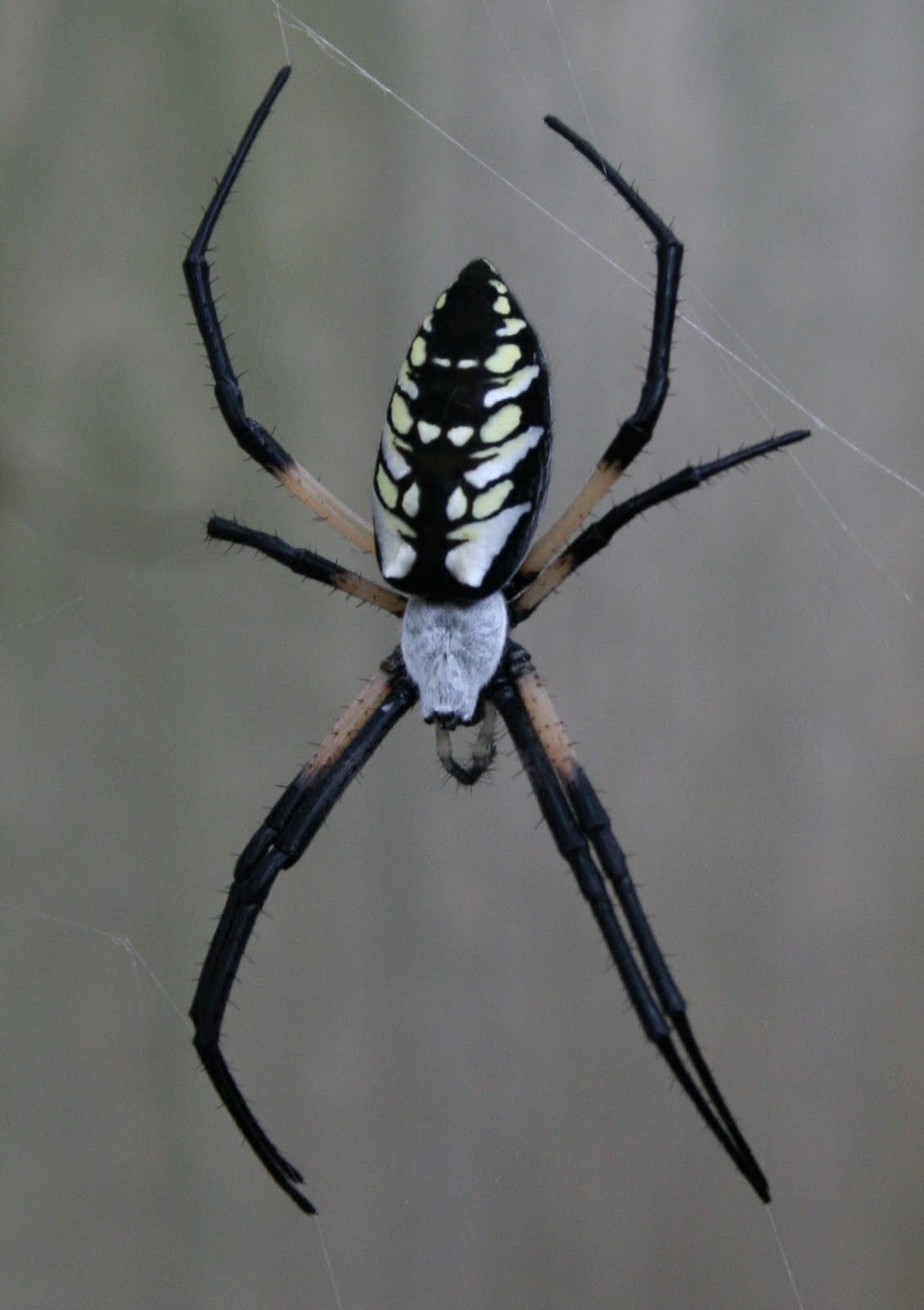 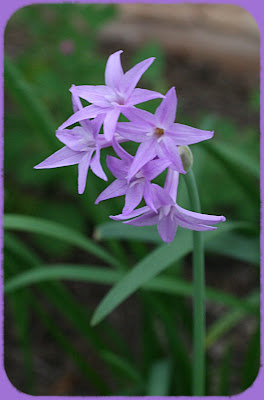 This is the first time the society garlic has flowered since the spring. I like it!
Posted by katina at 10:37 PM 3 comments:

It's hot outside. my tomatoes are under attack of the dreaded Stink Bugs. I'll be ripping them out soon--the plants look too far gone to try to save for the fall (except for the Ananas Noir and Purple Cherokee...this could be because they have produced naught but one tomato between the two of them). Instead I'll be planting some transplants, probably a green zebra and a cutting from the Ananas Noir.

Otherwise everything is doing okay. The eggplant is good, the squash are good, the parsley and lemon balm are great. I started some broccoli and cauliflower for the fall but the seedlings were attacked by snails or something so I don't know if any will pull through.

The society garlic and rock rose seem to love this weather (of course they also get afternoon shade), both turk's cap plants in the back are blooming, and I've discovered that in addition to moving one of the passionvines this fall, I'll also have to switch the cast iron plant and the giant petunias--the cast iron is in a spot that I was sure got shade but apparently is actually quite sunny (don't get me wrong, they're doing well there, it's just that the petunias would probably benefit more from the sun than the cast iron plant). The butterflyweed is a breeding ground for aphids...but I did see my first monarch on the plant the other day (it was either male, or it's not breeding season yet).
Posted by katina at 7:33 PM 4 comments: 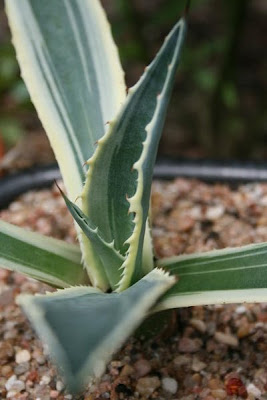 Posted by katina at 7:37 PM No comments: 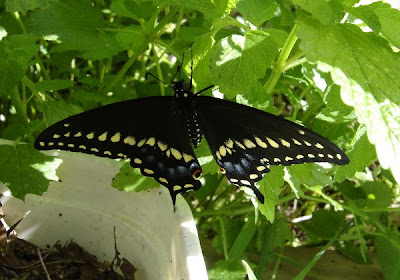 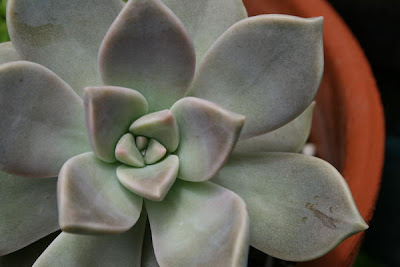 Posted by katina at 7:36 PM No comments: 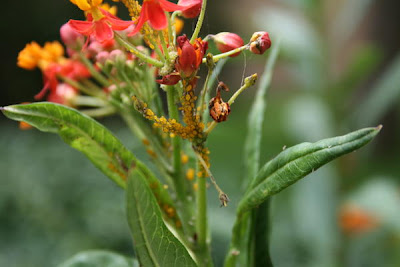 They warned me this would happen (aphids on butterfly weed). Still, it ain't pretty.
Posted by katina at 7:34 PM 1 comment:

OMG! I HAVE FINALLY FOUND A CHRYSALIS! 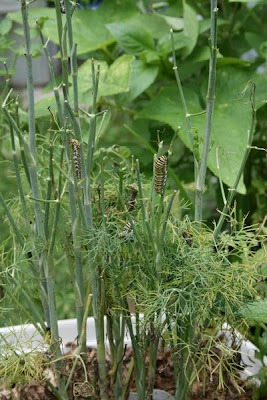 I was going to make some dill dinner rolls today, but opted against it when I got out there and saw all this.

But I also saw this: 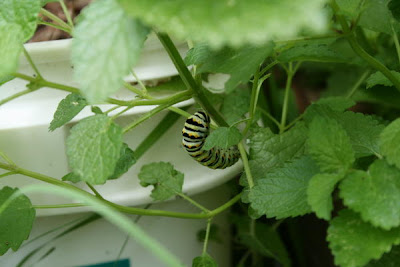 I shall name him/her Billy.

Billy turned into this a few hours later: 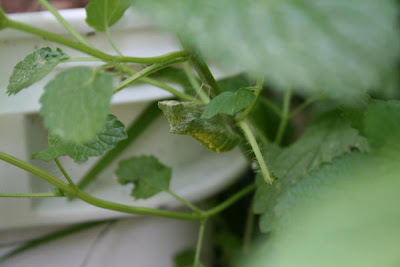 And I finally found the one that I thought I saw getting ready to pupate last week. I shall name this one George. George is the lighter green 'leaf' in the center of the picture. 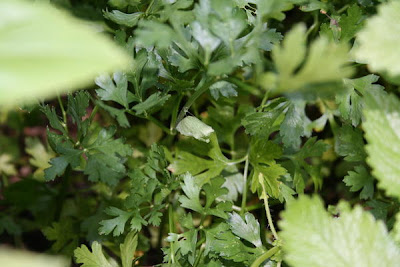 Best of luck little buddies. Hopefully this turns out better than the last chrysalis I found.
Posted by katina at 10:25 AM 6 comments: 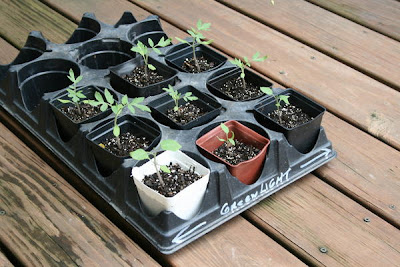 Even if none of these survive, I say it's still a success. I started the seeds in an old blueberry container and then, when the plants were larger, I separated them and planted them in their own containers. There are three brandywine in the front and the rest are green zebras.

Now then, who wants a tomato seedling for fall planting?
Posted by katina at 7:23 PM 1 comment:

My husband keeps seeing this and exclaiming that I have a watermelon growing. 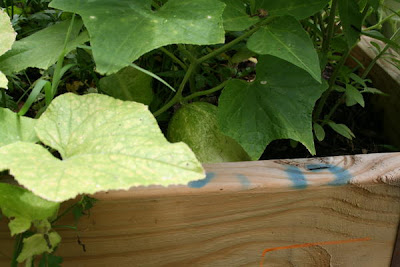 I have to keep informing him that it is not a watermelon but a cucumber.

I can see how he'd be confused since this cucumber is very globe-like and not cucumber-like. 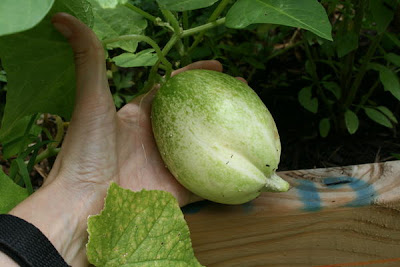 But I do have a watermelon this year, it is about the same size, and is protected from being run over by the lawn mower by the bucket I have the dill growing in and the planter I have the peppers growing in. 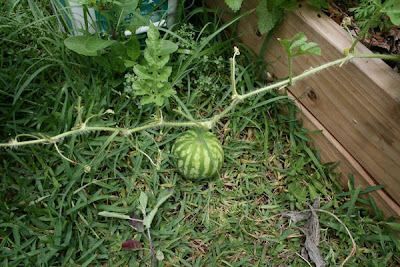 I have quite a few plants that some would consider weeds. Some (like the horse herb), my husband considers weeds, and some (like the Asian jasmine) I consider weeds and some, like the spiderwort that Bob accidentally gave me when he dug up one of his giant petunias, are considered weeds by one, and precious flowers by another.

I've identified horse herb and frog fruit in my yard (both considered weeds by the husband). We obviously have a ton of Asian jasmine and it takes over EVERYTHING, thus it is a weed. The spiderwort is not yet considered a weed by us. Claude helped identify vetch, which I considered a weed. I don't think the husband considered it a weed until it started growing in the lawn.

But, what I can't figure out is whether this is a weed or not: 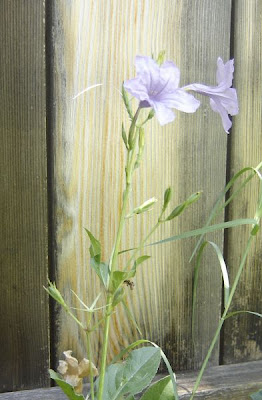 I mean it's a plant that I didn't plant and most of the time it looks pretty weed-like. But then it flowers with these actually quite large (relatively) and pretty (relatively) purple flowers. Very petunia-esque.

I've also found some type of Iris in this corner of the yard (by the cable box electrical doohickey thingamabopper), I should probably dig that up and put it where it will get sun so I can find out if I want to keep it or not...
Posted by katina at 10:03 AM 10 comments:

I planted the nasturtiums this year as a barrier to the SVB. I don't know if worked as I think all of my squash plants ended up with borers. BUT they do compensate by flowering for me. In Colorado I think I grew these once and they never bloomed (much like the morning glory and the moon flower). It probably had something to do with MiracleGro.

The variety I got was the Alaskan Variegated (I think) from Gardens before they closed.

The most prolific color is the Orange color: 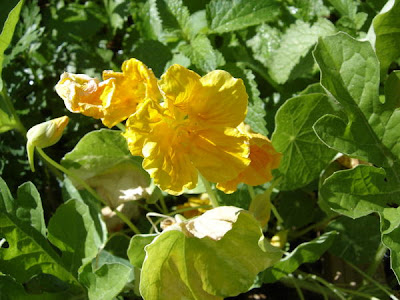 But my favorite is a toss up between the Cream and the Red (in picture form, I prefer the red, but I think in real life I like the cream better): 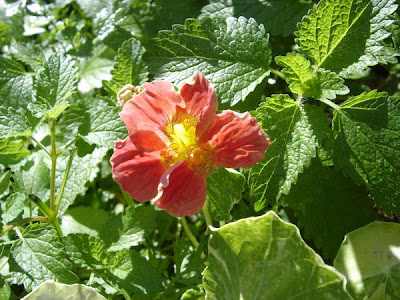 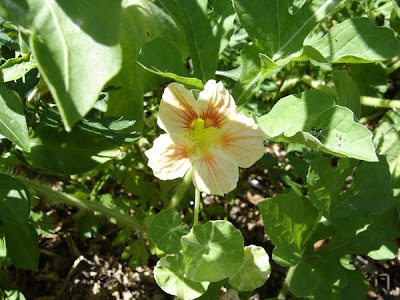 Posted by katina at 6:39 PM No comments: