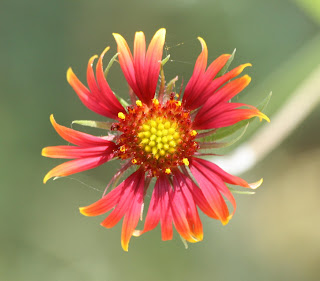 Seemingly only difference between Blanket Flower and Indian Blanket? Blanket Flower has a yellow center...well, that and this whole perennial vs annual thing
Posted by katina at 11:48 PM No comments: 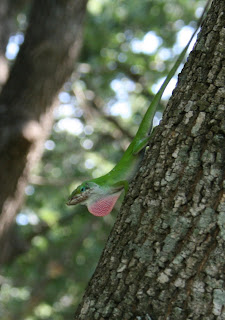 Finally got a picture of an anole inflating his dewlap. This picture was taken about a week after the last picture, and I question if it's the same anole. Watches me, but isn't overly concerned about me and is willing to hang around while I figure out my camera, most anoles are like leprechauns--you blink and they're gone.

Also, I see this picture, and for whatever reason I get that "It's tough out here for a pimp" song stuck in my head. I think it's because this guy has a scar that goes across his 'nose' and causes a perma-sneer.
Posted by katina at 11:37 PM No comments: 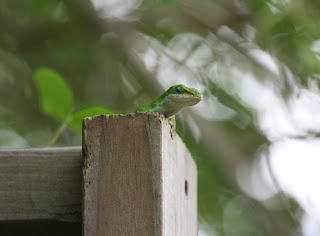 This little guy (actually, he's one of the bigger Anoles I've seen) was watching me and the cat (I.V.) from his perch atop the trellis.
Posted by katina at 11:31 PM No comments:

Bad Weather...just the other way around

We haven't had rain in the past week or so, and of course it's been mighty toasty out there (as Lee says "[We're] in the great frying pan that is Austin, Tx"

Of course, at this time last year, we had spiders everywhere, but with the lack of rain, it seems we have lizards everywhere instead. Pictures to come soon...oh trust me, I got some gems.
Posted by katina at 11:24 PM No comments:

I know, I'm a little late in posting this...

On May 14 we had our first real scare with bad weather (Tornadoes, hail, torrential rain, wind). Or at least, we were supposed to. There was a funnel cloud confirmed in Lago Vista, and a possible funnel in the 620/183 area. We did not get any wind, nor did we get any hail. We did, however, get to sit on our bathroom floor for 30 minutes while the neighborhood tornado siren went off.

After that whole debacle, we ultimately got 0.7" of rain according to our rain gage.
Posted by katina at 6:50 PM No comments: 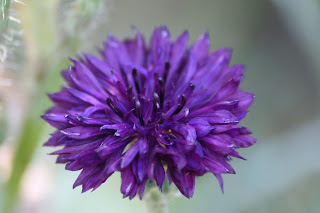 All of our other Corn Flower plants are the normal Blue color.
Posted by katina at 1:11 PM No comments: 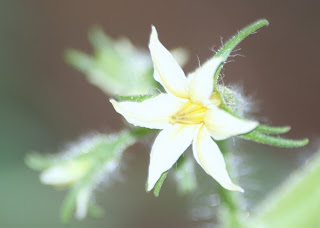 Posted by katina at 1:11 PM No comments: 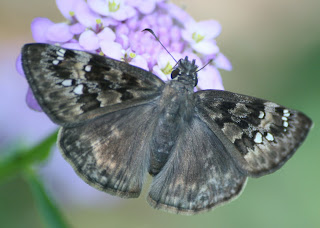 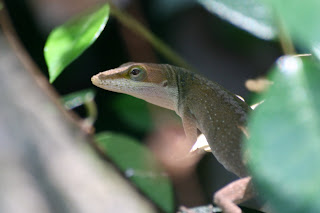 Posted by katina at 1:09 PM No comments:

So, since I have sitemeter, I can see what the more common searches are that bring people to my page (and furthermore how long they STAYED on my page reading stuff).

Austin Organic Gardening:
I don't think I've ever specifically said that I am an organic gardener, but I like trying to be. I do have Azalea and Rose fertilizer, but that was because I was going to do a grand science experiment and plant a couple of hydrangeas then fertilize each one with a different fertilizer to try to get one pink, one blue. But, I killed my hydrangeas before I even got them in the ground, so I gave up. But I still have the unopened fertilizers (even though there is a rose bush out front...but I honestly am trying to kill that one off because I don't like it).

Last year I bought all of my plants from Walmart, and I wouldn't say that they were organic, but once I planted them in the ground, we only used organic practices--so the plants only got fertilized with our Compost and Compost Tea. I also try to only use the water in the rain barrel, though of course, that is highly dependent on how much rain we get. This year I only have one transplanted plant (a Lemon Boy tomato from The Red Barn garden center that I got for free through their coupons), and the rest I grew from seed in recycled-from-last-year-plastic-pots as well as those little peat pots.

Orange Fogo Thai Peppers:
Yes, I have planted some of these. I planted 4 of the Orange Fogos and 4 of the Red Demons. Since I transplanted them, 4 of the plants have died off. However, if I remember correctly, I did a kitty-corner style planting with them, so really I should now have 2 orange fogo and 2 red demon. But, I don't know which pepper plant is which. Don't worry, I'm sure I'll figure it out when they start growing peppers. Also, all the plants are approximately 1" high. Hey, at least they're still alive.

Growing Avocado Trees in Austin:
I have this in a pot at work. Where it inexplicably flourishes. It currently has crispy spots on some of the leaves, but that is because they were the leaves that were touching the window a while back--the tree was starting to lean and I didn't have any supports, so I turned it so it leaned against the window. I transplanted it a month later and now it's got supports and everything. For whatever reason, I blogged about the Avocado Tree more on my normal blog than I did here. Anyhow, here are the pictures I took.

Asian Jasmine Austin:
This is the plant that I refer to as "Devil Weed" or "Devil Plant" This is because it does not die. Sure, there are places where it doesn't spread as much--Full Sun, and it does appear to be a very good plant for xeriscaping as I've never watered it... But seriously this plant would take over our backyard if we didn't hack it back 2 times a year. And just so you know, if you ever plant the stuff and then decide that you want to get rid of it, you never will-- You might be able to get rid of it by taking a shovel and digging the whole plant out.

When I moved down here, it became obvious that it was the cheapest groundcover the previous owners could find because there were at least 12 individual plants planted throughout the front and back yard. I decided to rip out the 2 that were planted by the crepe myrtle by our bedroom window. I spent an entire saturday out there with a trowel and tried to get every last piece. I thought I had done good until this year when I went out and found that it looks like I never even pulled the plant out...
Posted by katina at 11:18 AM No comments: 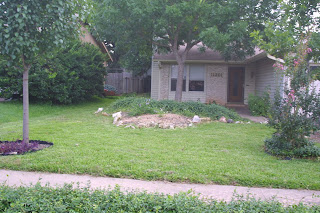 Pam at Digging asked for a picture of the front yard berm area. This is actually a picture my husband took to prove to our homeowner's association that we do actually cut the grass once every week. The backside of the berm has Asian jasmine (at least, that's what I think it is), and the front part has some Easter lilies that the previous owner planted in it. (Also, the tree that looks like it's in the berm isn't, it's about 10' behind it.

We have planted Lantana plants in it; we first planted two purple plants, but one died, so I planted two white plants in it last year which have come back this year. We also have some wildflowers growing there right now too. And since this is one of the well drained areas that gets full sun, I planted some watermelon seeds out there this year.
Posted by katina at 10:52 PM 1 comment:

I decided to plant some of the grapefruit seeds we got from our fruit we bought about 3 weeks ago.