Time to clean up ye olde cacti/succulent pots. I think my gardening goals for the year are going to include researching all the cacti and succulents I have in pots and figuring out which ones need to be brought in for the winter and which ones don't. I realize I totally could just leave them all out and if they make it, they make it, and if they don't, they don't, but I should at least probably AIM to do some research to know what I have in which pots. And don't you worry - I have SO MANY MORE POTS than what's shown here.

I think I'm beginning to have a Pot problem...

I did go to college at the University of Colorado, afterall.

Posted by katina at 8:17 PM No comments:

Labels: Cactus, My Photos, Texas Native/Naturalized, what have I gotten myself into?

As I mentioned in my previous post, part of the deal with Sunshine Community Garden Spring Plant Sale Day is that I spend the entire day with Roberta, it means that we spend the ENTIRE DAY TOGETHER.  And no, we don't just stay at the Sunshine Plant Sale.

After the Sunshine Garden Sale, we headed down to Zilker for the Austin Organic Gardeners' Plant sale.  Naturally the tomatoes looked much better at the AOG sale, but we were both tomato'ed out, and they don't have the same variety as the Sunshine sale.  But they do have ornamental plants - and so we bought some plants, put them in our car, and then walked around the gardens because we paid our $2, we might as well get our money's worth.


After Zilker, we went to Gordough's Public House for lunch (delicious).  Then there was the stop at Shoal Creek Nursery to pick up some Artichokes (Roberta) and Bamboo Muhly (me).  And finally, at like 4 in the afternoon, back to Roberta's house where there was the counting and organizing of the tomato plants, the walk around the yard, the saying "hi" to Roberta's chickens, the dropping off of tomato plants at Ana's house, the walking around Ana's yard looking at her garden (and her drainage solutions work she's doing), and, of course, just sitting around shooting the breeze before I finally decided to head home.


As I was pulling into the driveway, my husband sent a text, "I used to have a wife.  Have you seen her?"  I guess telling him that I'm going to be 'gone all day' doesn't translate into "I'm going to be out of the house for 10 hours" for him.
Posted by katina at 8:43 AM 1 comment:

As most vegetable gardeners in Austin are aware of, the first weekend in March is THE weekend to get your vegetable plants. This is the weekend to get them because the first Saturday in March is the Sunshine Community Garden plant sale. They have something like 150 varieties of tomatoes; if you can't find a tomato you want to try when you go to the sale then you just aren't a gardener.


Tradition dictates that I get to spend the day with my friend, Roberta.  It usually starts out at about 9 in the morning when I pick her up at her house.  We take our time getting to the Sunshine Community Garden sale to avoid the massive, "outta my way, sheeple!  I need that Purple Cherokee!" crowd where we pick up more tomatoes than we ever need, and a few peppers and eggplants.

As Roberta has already mentioned on her blog, I lost her at the plant sale.  Who am I kidding - I lost her before the plant sale.  She was going to do what I do every year - just go and select some plants that look good, but at the last minute she had looked at the plant list and made her own list of plants she wanted.  The best part was when I was walking around in the Tomato Tent with 3 of my tomatoes, and I turn around, and there's Roberta with a flat of tomatoes.  You can read Roberta's take on the sale here and here.

The biggest issue this year was that we had nasty weather leading up to the sale (not uncommon - I've gone to the sale in cold, windy weather more frequently than not).  This cold, windy weather consisted of a late season dip into the mid 20's on the Wednesday before the sale, accompanied by strong winds.  Apparently the tomato tent was moved 4' by the wind that night and some of the tomato plants got some wind/cold damage.  The part I found interesting was how it looked like an entire type of tomato was hit, but the other variety across the table from it (both varieties next to the tent flap) was perfectly fine - all the container tomatoes looked great, but the Cherokee Purples looked really sad - does this mean that the container tomatoes are slightly more hardy than the heirlooms? Very likely.  I should have paid more attention to the tomatoes that are from around the world - do the Crimean tomatoes fair better than the southern US tomato varieties in the cold?  Does Brandywine (which is from Pennsylvania and doesn't like our heat) or Super Sioux (from Nebraska) do better in the cold than Arkansas Traveler?  If only I could control the weather and actually test this theory...or had a really big refrigerator I wasn't using for anything.

Naturally, the nasty weather means that of all the years to have a list, this was not that year.  I NEVER make a list for the Sunshine Sale because I was always afraid in the past that they'd run out of the varieties I wanted (the first two years I went to the sale, they would routinely sell out of many varieties very early in the day, now they purchase a lot more plants, and while they do sell out of some of them, there's still a big enough selection that it wouldn't be the end of the world). Some of the plants I got - like Vorlon - were a spur of the moment choice because the San Marzanos looked like crap (even though the Vorlons were closer to the tent flap).  My list consisted of 10 plants, and I really only have space for about 6, so it wasn't THAT big of a deal.  Even though I say some of the plants looked really sad (and they did), I still ended up getting 7 tomatoes - 6 of them on my list; and there were plenty that looked awesome, but I was being good and NOT buying 40 different types...though I did take a photo of all of Roberta's and my plants and sent it to my husband telling him to start working on another garden bed.  He was not amused.

March 14: Clean Out and Transplant 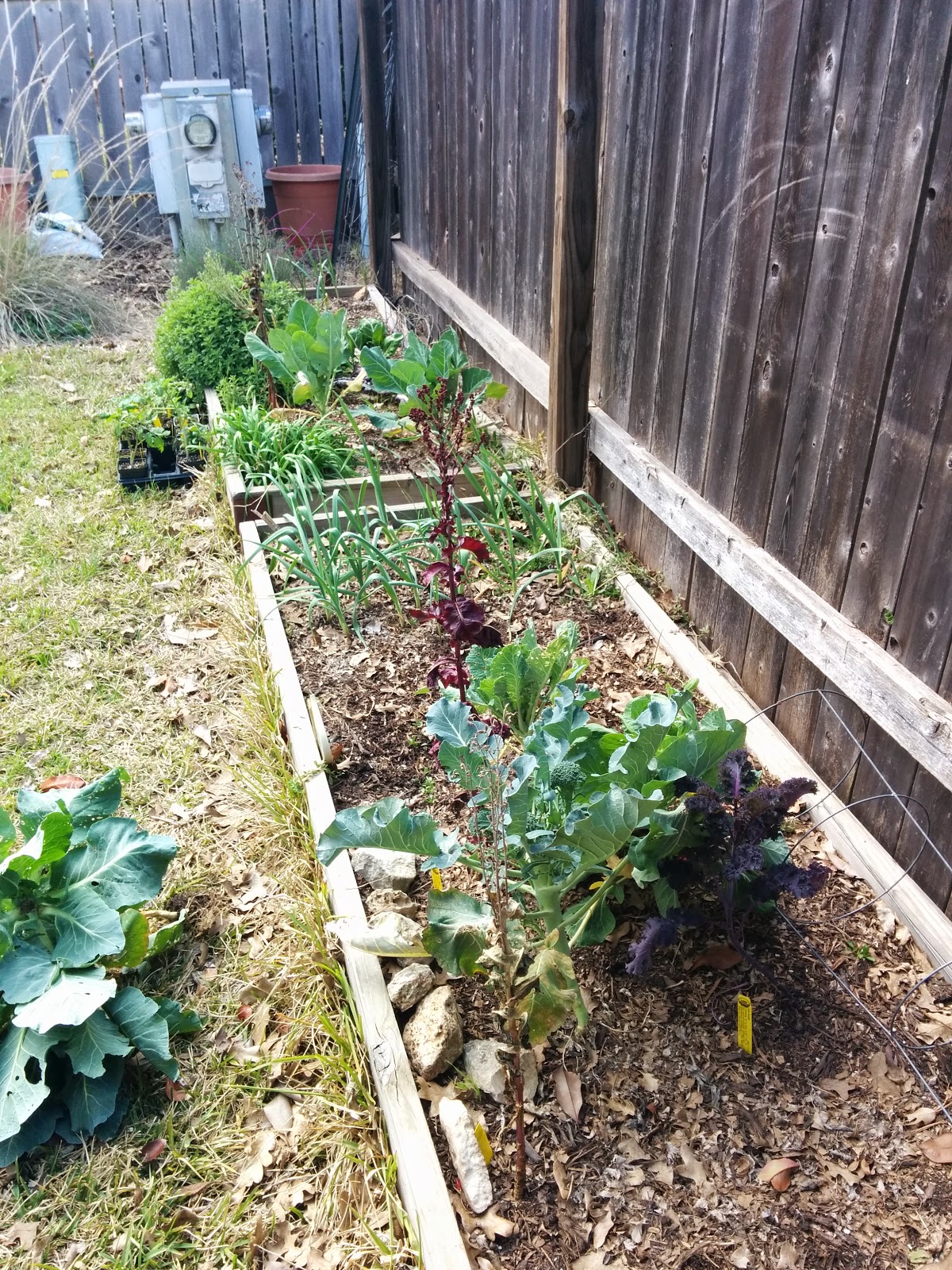 A picture of the garden before cleaning it out and getting ready for the Spring garden...of course I didn't think about taking a photo until AFTER I'd already pulled out 2 cauliflower plants. 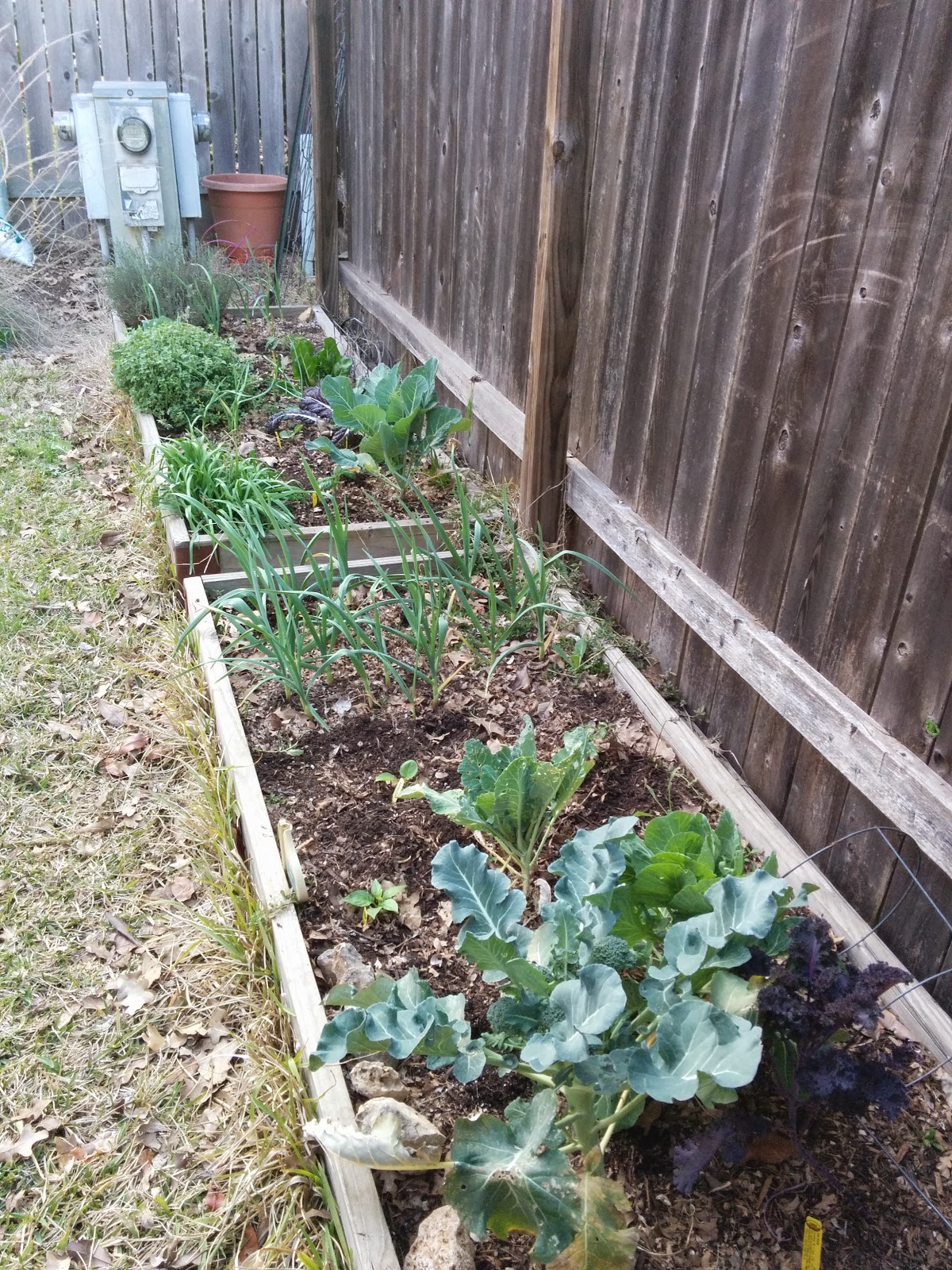 After Spring planting.  Doesn't look much different because the new plants are little.  (and some of the plants were already eaten by March 15 - fie!  I knew I should have waited on planting the peppers and eggplants - but I decided to plant them because I didn't want to have to worry about keeping plants in pots alive even though I have 3 peppers from last year saved and ready to be planted)  You'll also notice that I still have brassicas in the garden.  The broccoli is still producing side shoots, the purple cauliflower has a head that I'm waiting on.  The Brussels Sprouts haven't even really formed yet, and the garlic will stay in the garden until May or so....so really all I took out where the cauliflower plants I'd already harvested, the bolted lettuces and the stump of mustard greens.
Posted by katina at 7:25 AM 2 comments: 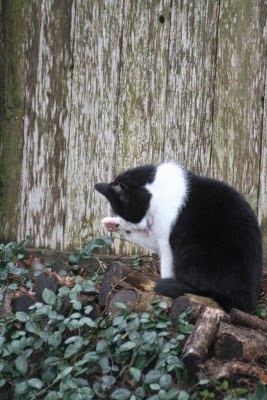 Labels: cute and fuzzy, My Photos

End of the line 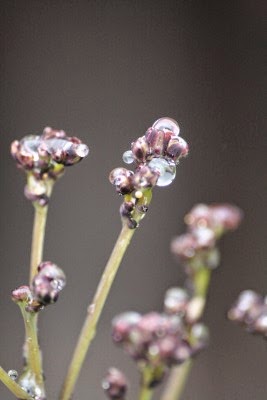 Finally got out my SLR again.  The last time I used it was in Paris.
Posted by katina at 6:07 PM 3 comments: