When I was a kid, we never necessarily made a big deal about going to the national parks as much as it was more like 'Well, this is the closest we'll ever be to it, so we might as well go'. Oddly enough, I grew up a couple hours' drive from Rocky Mountain National Park, and I don't think we ever went there...at least, not that I remember. But I digress.

My mom and dad both grew up in South Dakota and my mom's family has their reunions there every 3 years. Since it was cheaper to drive than it was to fly with two kids, it was always a family road trip. Every time we went back, we stopped at Mount Rushmore. I still consider it my favorite of the National Monuments--it even beats the DC mall. It is also the only photo of a National anything that I have framed (though since I'm doing a photo project in our guest/drum room, I'll soon have three pictures of Yellowstone/Grand Teton and three of Big Bend up there). 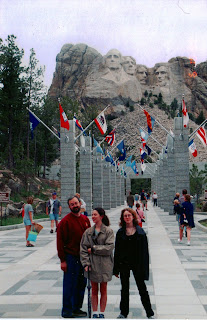 I'm the one in the trench coat. I was cold. I was walking around using the umbrella like a cane. For whatever reason, I remember that I was pretending I was Mark Twain.

Of course, on one of the trips back we stopped at Devil's Tower in Wyoming (and Fort Laramie). It was also around this time that we went to Yellowstone. This trip was precipitated because we were living in Cheyenne at the time and we were going to be moving back to Colorado so it was decided "We'd better see Yellowstone before it's another 2 hours away". I don't remember much of the trip--we stopped at Independence Rock, and we ate at a restaurant in Thermopolis that had the most dead animal mounted heads I've ever seen...or rather, I guess I should say we didn't eat there--my sister and I claimed that there was no way we were going to be able to eat buffalo and elk steaks while said animals watched from above as the heads were mounted over the table. Instead we ate at some restaurant that had fish mounted everywhere. And we saw lots of buffalo in Yellowstone. It was during our over-sized sweatshirt and leggings phase as well. Hey, I was in the 6th grade.

Every road trip we made had some history thrown in. When we went to Disneyland, we stopped at Mesa Verde, the Grand Canyon and Bryce Canyon. When we went to Disneyworld there were stops at Vicksburg, Chattanooga, Kennesaw, Stone Mountain, St. Augustine, the Kennedy Assassination Museum, and at every historical marker in Texas (well at least on the road we were traveling). A cousin's wedding in Ohio warranted a trip along the east coast seeing revolutionary war battlefields, DC, Mammoth Caves, and more Civil War battlefields. Etc. Etc. Etc.

Since getting married (all of 4 years ago), we've gone backpacking in Yellowstone and Big Bend, camped at Grand Teton, and went to DC and Gettysburg. And all of this was within the last 3 months. I blogged about every day of the Yellowstone trip on my other blog. If you don't want to read all the verbiage of the blog entries, just know that when I label the Prius as a "Stupid Car" it really has nothing to do with the car other than it has a huge center console display and it doesn't even bother telling you "hey dummy, the reason the car won't start right now is because you're not stepping on the brake pedal". All the pictures can be found on my Picasa page here:

A month after Yellowstone, we went back east for one of the husband's cousin's wedding. My parents met us out there and we hit up a couple of historical markers in the Pennsylvania/Jersey area. After my parents left, we headed down to Baltimore, DC, Gettysburg, and then drove back to Philly for the wedding. All of those pictures can be found on my Picasa page as well. Of course, this time there are many more people in the photos since we were with more people.


Most recently, we took a 5 day trip to Big Bend to do some 16 miles worth of backpacking. Water is heavy in case you didn't already know. The weather was nice and of course it was wonderful. The part I find odd though is that the border crossing agents have a little set up just south of Marathon, which is like an hour north of Big Bend. Very odd. The Big Bend pictures can be found here:

I swear, I'll get to it, but I currently have a sick cat who is having to be transported between the normal vet and emergency vet every morning and evening. needless to say I'm not of a mind to really blog about gardening or big bend. besides, I still need to actually put in the garden. Though I did get a bunch of flower plants (from Bob) planted on Saturday...of which I need to get pictures. But as I said...later, when the cat issue is figured out.
Posted by katina at 10:41 PM 1 comment:

Just got back from Big Bend National Park. A blog post to follow for the National Park think that Pam/Digging is collecting.
Posted by katina at 9:20 PM No comments:

I believe that El Nino has finally reached Austin and it is bringing all the rain. we had 1.25" last night and then probably about another 3" today. I have to use my highly non-scientific method of measuring the depth of water in one of the buckets outside and then subtracting the amount of rain that was in it before it started raining...or rather how much water I thought there was before the storm this afternoon.

One thing is for sure, certain areas of the yard become ponds and rivers during downpours. One area is the "lower garden"--This area currently has rain lilies, a turk's cap, horse herb that I never planted, and one little Esperanza plant I got from Bob at Draco Gardens last weekend. The whole area along the line between our property and the neighbors to the south becomes a river. Since this area is close to the house, I would much prefer to turn it into a rain garden with some sort of French Drain system--especially since it was probably 2" deep against the foundation of the house and 3" of rain isn't a 100-year storm (10" is though). The other area that ponds is just below the dry pond area, which we can always just expand a little.

had a nice rain storm that dropped 1.25" here last night.

NWS is predicting a bunch more where that came from for the weekend.
Posted by katina at 7:15 AM 1 comment: