Combining (and this is really sad because I was just contemplating on if 'combo-izing' was a word) Bloom Day, which is hosted by Carol at May Dreams Gardens, and Foliage Follow Up, which is hosted by Pam at Digging, and posting them together a little late.  Oh well.  Better late than never.

Let's start with the picture from across the street - 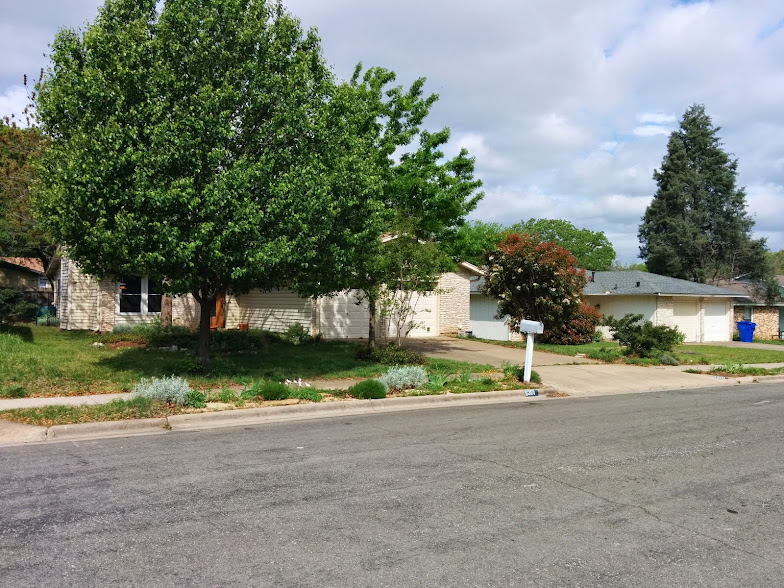 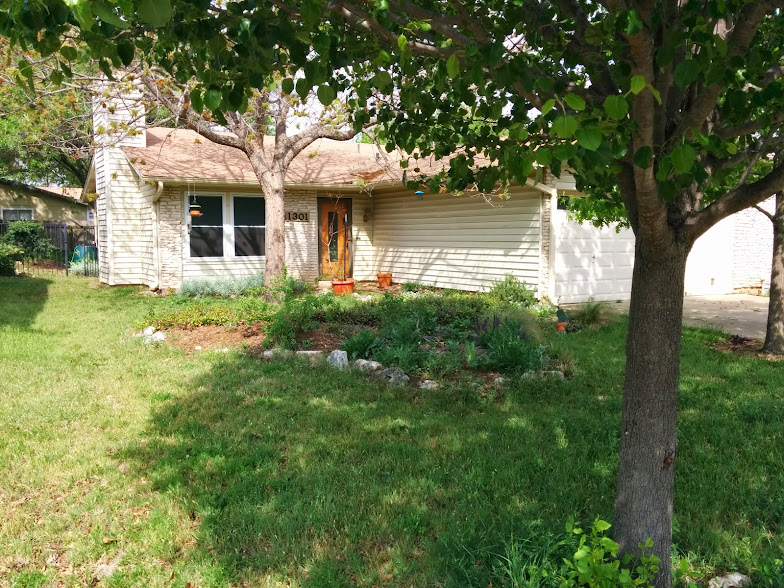 And from a different angle - 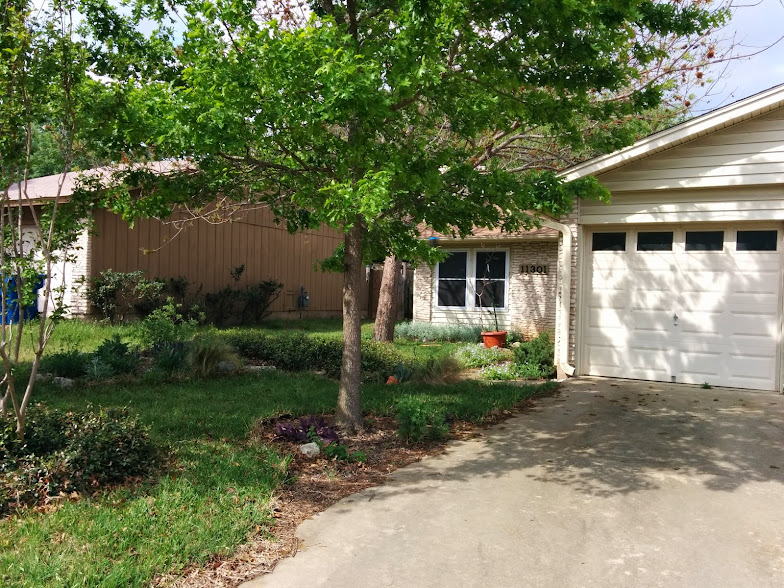 And taking a gander at the hell strip - 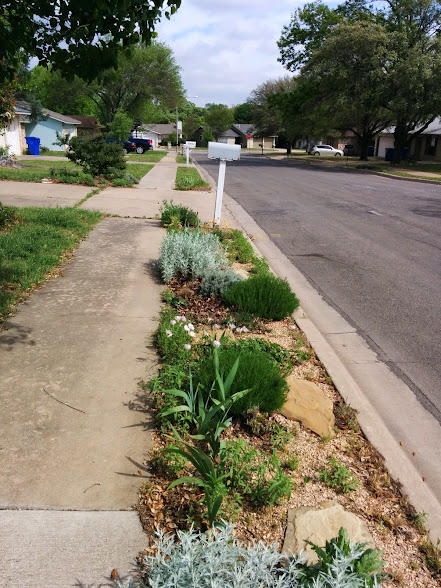 Around to the back yard, looking through the gate -

The Panoramic from the rain barrel -

The Panoramic from the back door -

Taking a quick look at the veggie gardens - 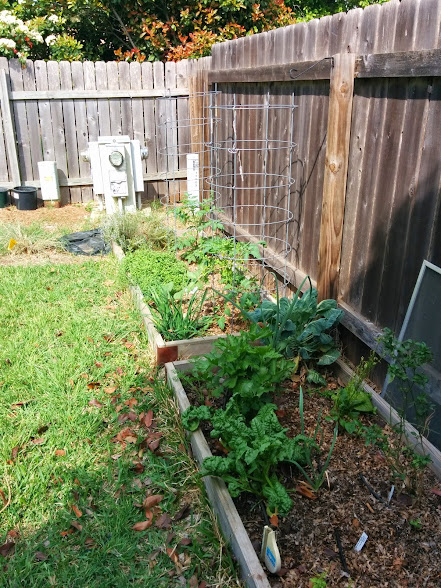 And finally - the World Photo -
April World Photo
Posted by katina at 9:21 PM No comments:

Sorry for the lateness of all of the upcoming posts.  So far behind...so very far behind. Though, to be fair, it's not like I didn't have some very good excuses.

The first Saturday of April I took Strider, one of the Dogs Out Loud dogs available for adoption, to McKinney Falls where the bluebonnets were just AMAZING.  Also saw some wild clematis (which was kinda cool... and it made me want some, so now I gotta find a place for that).


In the end we hiked about 4 miles since I originally planned to hike the "homestead loop" but then decided I didn't want to cross the river when it looked like it was going to be raining, so instead we walked over to the Onion Creek Hike and Bike trail.  I think Strider was kinda glad when it was all done - but the point is that he did the whole thing and seemed pretty okay with it (which is good considering that I'd like to take him on a 5k run in a few weeks). 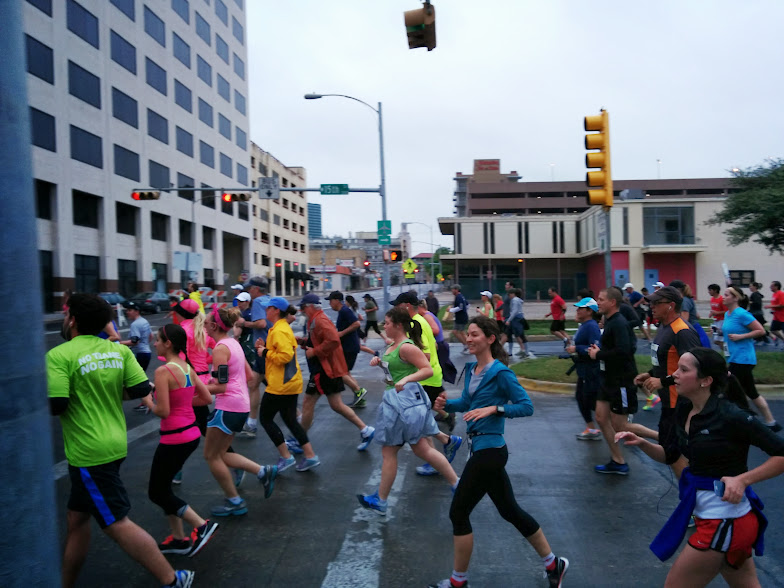 The following weekend I spent Saturday morning reading a book and cleaning all of my bird stuff (and contemplating getting a feeder specifically for the woodpeckers, and upgrading my hummingbird feeder to something easier to clean).  THEN I went to the East Austin Garden Fair.  Where I didn't take any photos, which I'm sure all the Master Gardeners are happy about.  But I did get to spend a few hours talking with Vicki, Meredith, Sheryl, Caroline and Daphne.  I missed Ally, though she had to have been there because she always works the chicken table, though maybe she was at home with her new puppies.  After the EAGF, I picked the husband up on our way to visit his parents for a pre-Easter get together.

Sunday, I spent most of the day doing Floodplain Outreach at the Colorado River Alliance Family Festival.  Afterwards, I decided to reward myself with a trip to BookPeople (mostly I was looking for a book titled "Bones would Rain from the Sky," which I didn't find, so instead I got a book of Hans Christian Andersen Fairy Tales and a true crime book about a serial killer in Paris in the 1940s.  Eclectic tastes, I have them.)

So... all this to say that I'm going to be writing a (very, very) late post for April Wide Angles, and a (very) late post for bloom day/foliage followup.  And of course the upcoming weekends aren't looking to be any less hectic - Pints for Pups and Change for Change are this Saturday in case you're looking for something to do.  I'm going to try to go to both (especially since my favorite pup is going to be at Change for Change).
Posted by katina at 8:22 PM 3 comments:

So back when my parents moved into their house, they were given the option of either paying for the building company to design and install their yard, or they could do it themselves (or hire someone).  They decided that since going with option A also meant that they had no choice, or even veto power, on any plant that was planted, that they were just going to have me do it.  Of course, that also would have meant that I would have been digging holes and what have you - all on top of my normal yard work that I need to do, and all the shelter work on the weekends, and it was just pretty obvious that it was going to be bad for all parties involved.

But, I did offer to come up with a plan, or review any plan they got from the landscaping company.

In the end, the plan they're using is one that is a modification of the plan that the landscaping company based on my original plan. 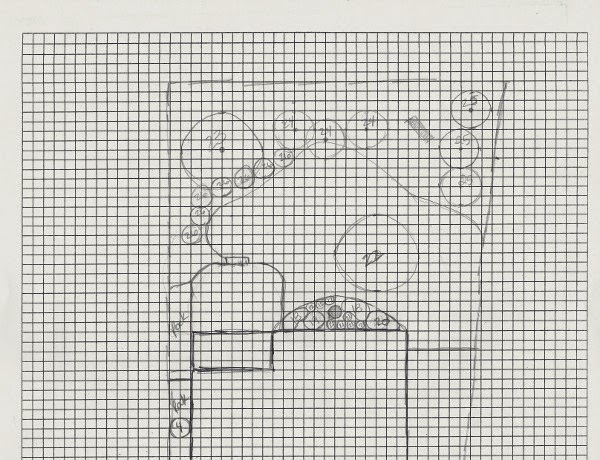 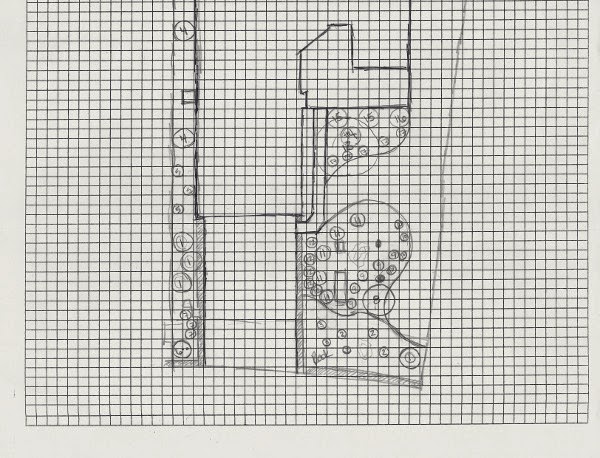 Labels: Grass Reduction, Projects, Texas Native/Naturalized, what have I gotten myself into?

Fact:  My cousin and his wife are ceramicists. (you can see their store here)

Fact: They make a bunch of cool stuff, but none of those things were flower pots.

Fact:  They do custom orders

Fact:  I bought $60 worth of succulents from East Side Succulents

I think you can see where I'm going with this...

And this is how it came to pass that I emailed my cousin's wife and asked her to make me some succulent flower pots.  When asking for custom stuff, I usually give some ideas and try to get out of the kitchen - I figure I'm paying these people for their expertise - that's how it is when I order stuff from Bob at Draco, that's how it is when I get artwork from my friend Laurie, and apparently, how I also order pots from my cousins.  I would recommend that if you're going to put in your own order for a custom pot, that you also specify what type of holes you want in the bottom - many small ones or one dime sized one.

I told Danyelle that I had a pitcher and a bowl that she made, but I didn't have anything that Jared had made so at least one item had to be made by him (and that if maybe, just maybe he would be kind enough to include a baby-head, that would be great), we usually go for things in the cool color range because it's so blame hot down here, and that I loved her hooter mugs so I NEEDED at least a few of those (in pot form, mind you).

A few weeks later, this is what I received: 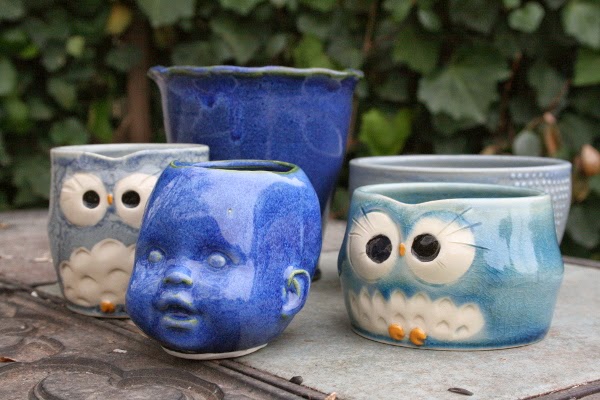 The owls (hooters) were made by Danyelle and the other items were made by Jared.  These are all small items - the two pots in the background are the largest of the five, and they're roughly a 4" pot size.

It took me a few weeks, but I finally managed to plant some of my succulents in the pots (keeping in mind, of course, that I decided all of the succulents I'd bought just wouldn't do and I needed MORE succulents so I went to Red Barn and HEB and got even MORE plants; and wouldn't some portulaca just look stunning?)

So far I haven't even used any of the plants I got from East Side.  And rather than leave them in my backyard where I'll see them every once in a while, I'm taking them to work where they will make me even happier (plus they're less likely to get damaged there, I hope).

And without further ado - Voila!  (I'm thinking that the doll head ones would look pretty awesome painted up for Dia De Los Muertos, or even just little skulls instead of heads...uh oh, I think I feel another custom order coming on). 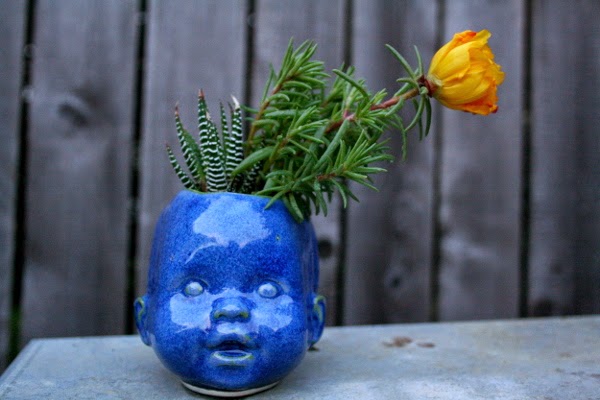 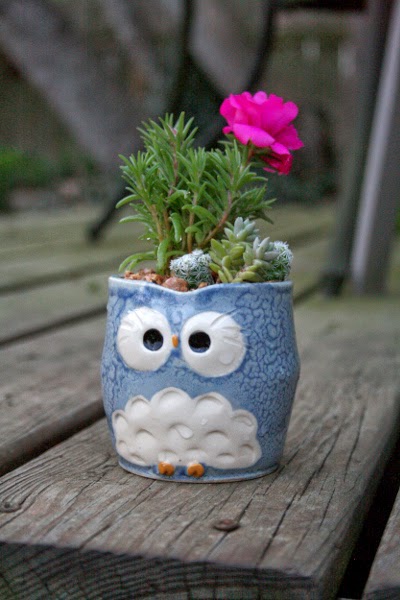