I thought for sure that by me going and picking off all the large-ish tomatoes and peppers that it would for sure guarantee that it would not freeze last night. And oddly enough, I don't think it did. It did, however, get cold enough to kill off the bell peppers (even though they were covered), the cayenne, most of the habanero and obviously the eggplant (I say obviously because it wasn't even covered, and it tends to die as soon as it hits 35 degrees). The tomato plant made it through okay, so i've gone and covered it again along with the little pepper plant and the habanero.

The reason I don't think it made it down to freezing last night? because all the other plants I didn't cover that should have been frost damaged for sure, weren't. So either the microclime in the garden corner is colder than the front yard and the side yard, or the peppers and eggplants die when it's 34 degrees outside.

You know, I really ought to invest in an analog thermometer--the digital ones keep breaking or the batteries keep dying or something.

Also, I planted the onion starts I got from Ross, I ended up with more this year, but not all of them look like they're going to make it...which means I'll probably end up with about the same as last year. Which turned out pretty well--I just used up the last of the garden onions last night.
Posted by katina at 4:53 PM 6 comments:

sorry for the weird formatting, I can't get my phone to play nice with Blogger. Only sad because they're both run by Google 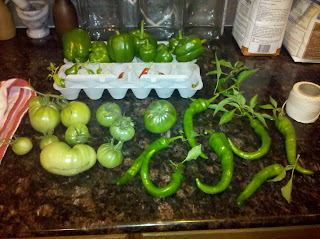 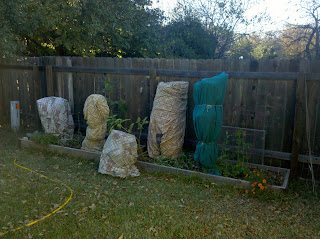 i've covered the plants again in preperation for another freeze (though i question if it actually froze at my house last night since nothing seemed damaged). last night i had covered my 2 larger tomato plants and left the smaller one to fend for itself; today i figurred out most of the tomatoes on the plants could probably be pulled, whereas the ones on the small tomato could not. so out with the big plants and covering the small one it is. of all the covered plants, the vast majority are peppers--I'm hoping to get some more large and/or ripe peppers before the plants die.
Posted by katina at 5:06 PM No comments:

So...We're at that time of year again. The time of year when the below freezing temperatures start. When I was a kid in elementary school, the teachers would always hold a contest where the goal was to guess the first day of the year that the snow would stick to the ground (the cement/asphalt). Of course they always offered some prize of some sort, and I don't really have any prizes that anyone would really want...so bragging rights it is!

So what are your guesses of date when we get the first hard freeze (below 32 F for at least 2 hours) at Camp Mabry? at ABIA?

So, as I'm sure you've noticed, I've been MIA since the beginning of the month. Firstly, I didn't have anything to blog about on this blog, and secondly, if you follow my tweets, then you know I've been out of town since the 5th.

Luckily everything survived the cold-ish weather. Trust me, I was fuh-reak-ing out when I landed in Boston and found out there was a freeze watch in effect for Austin. And I had debated long and hard about whether to bring the plumeria plant into the house or leave it outside. I opted for a sorta compromise and left it outside but right next to the sliding glass door (hoping that it would keep it warm enough at night).

Upon returning, everything looked good. I was quite surprised that the avocado tree was not all wilty and in need of a good soaking. The potatoes, however, did look worse for the wear. A lot worse. As in "little mushy brown sticks" worse. Now then, this wasn't that much of a surprise since the plants had been turning yellow and starting to look like they were going to give up the ghost, so I went ahead and let nature take it's course. I'm guessing that it was a combination of not enough light and too much water that did them in as the plants didn't look diseased.

Anyhow, if you go back through time, you can see that I planted them at the beginning of September. This indicates that there was slightly over 60 days from when I planted to when I harvested. All of the varieties should have been in the ground for at least 90 days.

Even though the potatoes are small (quite a few are smaller than a dime), I did end up harvesting about 20 potatoes. I do not know if the box helped at all (in fact I don't think it did since all of the potatoes were at about the same level as the original seed potato (indicating that the potatoes are not ones that really need 3' of mulch on top of them to get a good harvest)).

Anyhow, I will try this again in the spring planting season (aka January).
Posted by katina at 2:24 PM 3 comments: