Gomphrena and Garlic Chives.  My new favorite combination.  This is my first year growing the gomphrena and while it is the second year for the garlic chives, this is the first year they've bloomed.  The gomphrena is an annual while the chives are a perennial...I've also got both of the plants in my actual garden bed, and while I like having them there, when I go back to gardening instead of doing my "let's have a non-garden garden" thing, this may be a problem.  Oh well, I like the white with the neon purple...I like it a lot.  maybe some of that Peter's Purple Monarda with the gomphrena will look smashing.  Yes, that will be a combo to try. 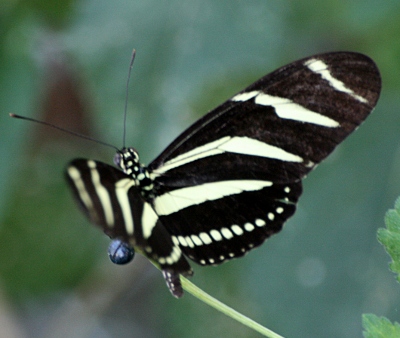 A butterfly I found in my yard - it's like all those butterfly plants I planted are actually attracting them or something...
Posted by katina at 9:39 PM 1 comment:

Of four first generation black jalapeno pepper plants I have, two have fully green leaves (only one of which is producing peppers) 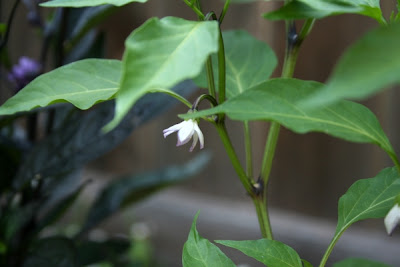 The other two plants have purple "dipped" leaves, but are not producing peppers at all - though the bigger of the two plants does look like it's getting ready to bloom.  So, we'll see.  I just love experiments, don't you?! 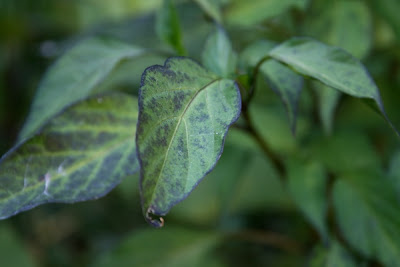 Posted by katina at 9:05 AM No comments: 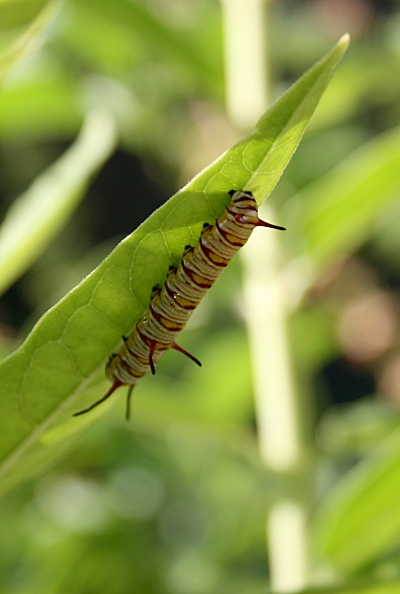 I was beginning to think the swamp milkweed wasn't a preferred plant for the Queen caterpillars.  Nice to see that it will do.
Posted by katina at 8:58 AM 1 comment: 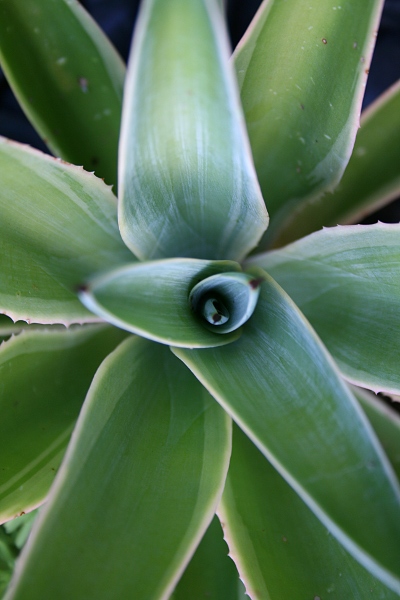 A little late for foliage followup, but better late than never!

Thanks to Pam at Digging for hosting this on the 16th of every month.

Who would have thought that there would be plants blooming in August?  I mean, it's hot out.  All day.  Every day.

Yet there are plants blooming.

In my yard, there aren't very many (mostly because I don't water them enough), but the gomphrena is blooming even though I don't go out of my way to water it (disclaimer, it is in the veggie garden so it does get watered more frequently than it would otherwise).  Also, this plant is one from Eleanor's garden that was given out at her memorial service, so even though I'm pretty sure it's 'Fireworks' gomphrena, I'm going to always refer to it as "Eleanor's gomphrena" 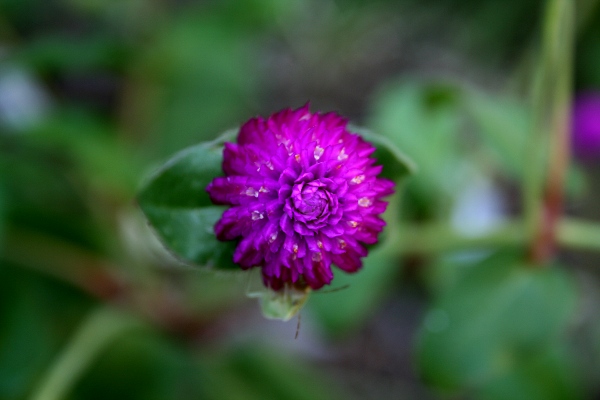 I was just lamenting a few days ago that my garlic chives hadn't ever bloomed (this is the second year I've had them).  And then, as if the plant heard me, it started sending up bloom stalks.  They're not quite open yet, but I'm counting it.  This particular plant is one that I got from Bonnie at Kiss of Sun - the one I got from planting seeds looks like a spindly little thing - the nut grass is bigger than it. 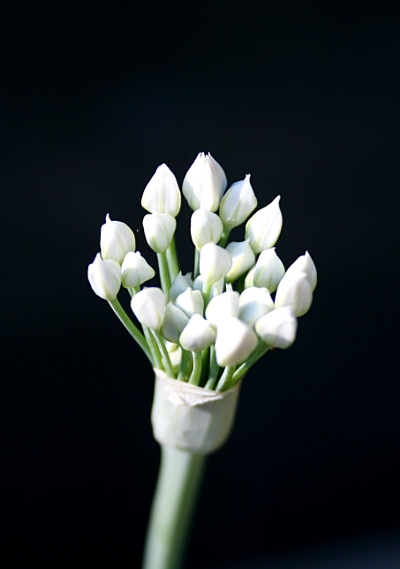 The plumeria is still going strong, and is still putting out new flowers.  It gets watered every day since it's in a pot on the deck and gets psycho lighting.  The leaves finally started getting some crispy spots so I've moved it to a different location to see how it does.  I got this plant as a pass-along from Bob at Draco Gardens. 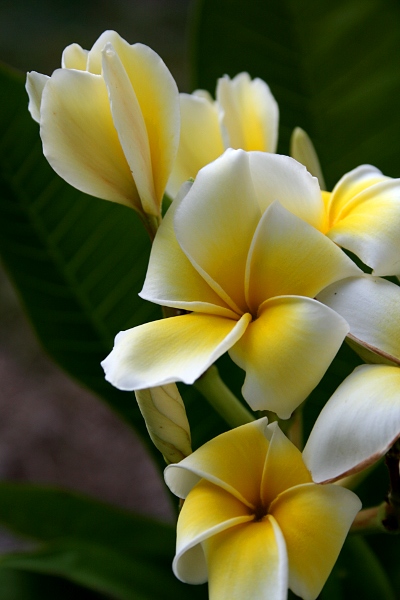 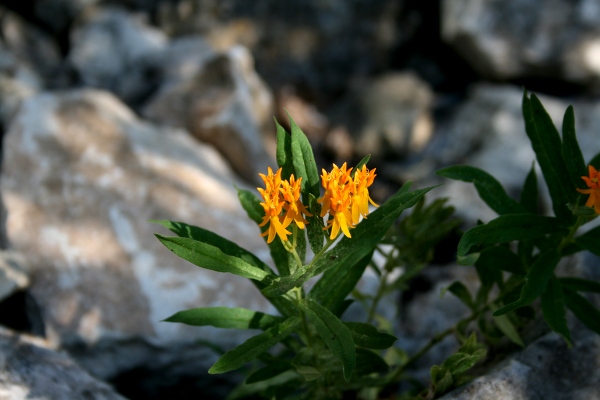 
Thanks to Carol at May Dreams Gardens for hosting bloom day!
Posted by katina at 10:42 AM 2 comments: 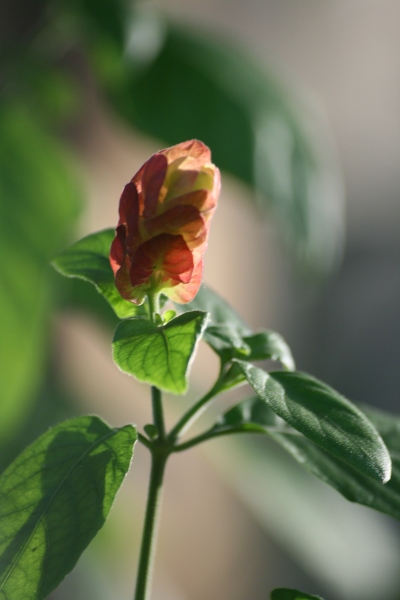 One of my favorite plants for part shade is the Shrimp Plant.  Like most plants that are native/naturalized to Texas but not Colorado, I wasn't a fan at the beginning.  But it blooms and it isn't a huge water hog, so it has won me over.  Plus it comes in different colors - I think my next one will be one of the orange ones.  While it's supposed to be a sunny to part shade plant, most people I know have the plant in part or dappled shade (I know I do).  The plant normally gets cut back to about 6" after we have a hard freeze, this year it didn't get cut back since we never had a hard freeze and it is out of control.  The plant normally grows about 3'-5' tall and about the same around.  It is "slightly" deer resistant - I take this to mean that it will be munched on, but there are other plants that they prefer more.
Posted by katina at 5:55 AM 3 comments: 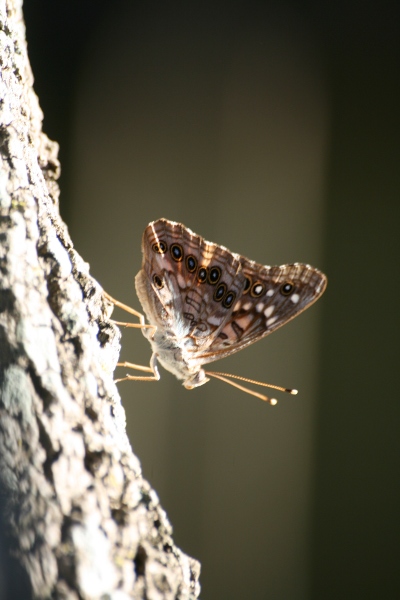 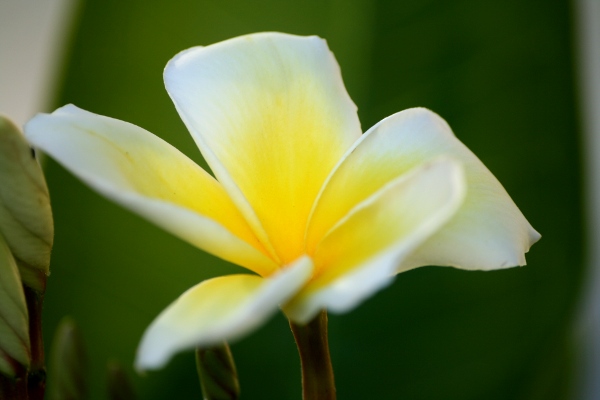 My plumeria plant has FINALLY bloomed.  I'm excited that it's yellow, and I haven't gotten sick of the smell (yet).
Posted by katina at 5:19 AM 4 comments:

For my 30th birthday, my friend and coworker, Andrea, got me some plant tags.  Said plant tags are re-useable and one is supposed to write on them with gel ink pen.  As I haven't ever had super great luck with reuseable plant tags in the past, I took pictures of them figuring that at the very least I could keep track of the types of garlic associated with each plant tag picture.

Here are are the before pictures (and yes, the tags were actually white): 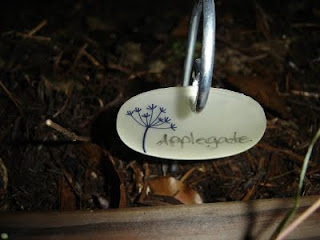 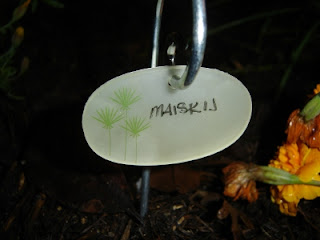 And here are the after pictures (yellow and faded, but still legible): 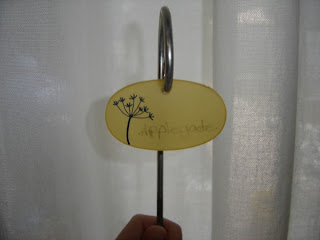 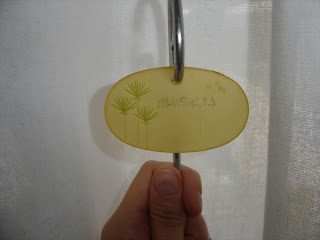 Sadly they do not wipe off as indicated (soap and water).  Rubbing alcohol made no difference.  This is why I used them for the garlic - I figure I will likely have these garlic varieties growing every fall so it's not a problem if I have to reuse the same stakes.  I wonder if the tags would do better in the shade...
Posted by katina at 10:22 AM No comments:

As most of you know, I created a grow box for my tomato plant this year.  I don't know what type of tomato plant it is, but I'm guessing some heirloom - one of the purple or black varieties, based on look and flavor.  Furthermore, the number of tomatoes I've gotten off of one plant has far surpassed the number of tomatoes I've gotten off of multiple plants.  So yes, I'd have to say that I'd do the grow box again if given the chance - hell, I might even make some for my inlaws as Christmas gifts this year. 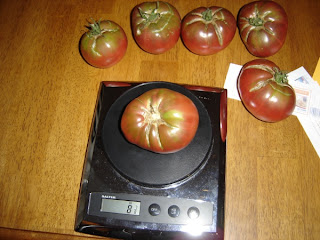 I don't remember the total number of tomatoes I've gotten thus far - I took the picture after we had already eaten three, but that picture was also taken like a month and a half ago or so, and I know we've had more tomatoes since then, so I'd guesstimate that we've gotten about 12 or 13 tomatoes from one plant (compared to my previous record of maybe 6).  Most of the tomatoes are about 8-9 ounces, and they crack like crazy even with constant access to water.  The plant currently has another 6 or so tomatoes on it - all that rainy weather we had with cooler temps allowed more flowers to set fruit.
Posted by katina at 10:11 PM 2 comments: