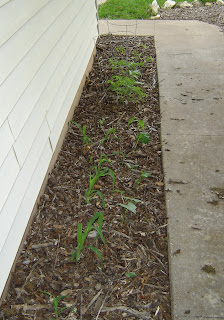 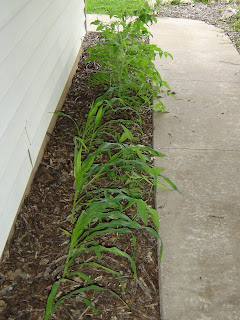 We got approximately 3" of rain between April 29 and May 19. Watering on my side has been pretty minimal. I think I did one shot of Compost Tea. As I said, I'm claiming it's the beans that have made everything grow so well in the front garden. The pepper plants have already started flowering, and there are some baby cayenne peppers. The watermelon/cantaloupe are growing, though not awesomely--so I doubt we'll get any fruit from them. And something is munching on the tomatoes, though I can't find any horn worms or slugs, or anything else that would eat them--it's probably Figacat then. Some of the corn looks really good, and some of it looks kinda bad, so I don't know how much we'll get from them. Growing up in Colorado, planting 12 corn plants wasn't ever enough to feed a family of 4...well, all at the same time in any case.

The back garden is pretty barren. The herbs are still there, and the flowers are surviving (though the red columbines haven't bloomed since I planted them--the blue ones seem to bloom about every other week or so).

Today (May 19), I went and cut back the parsley (which is already wanting to flower), rosemary, thyme, and garden oregano. The little dehydrator is full of herbs right now. After this batch, I think I need to start drying some of the flower pot oregano, as it's going gangbusters now too.
Posted by katina at 6:25 PM No comments:

The next door neighbor's cat insists on using the front garden as a litter box. I don't know why. There is plenty of wood chip/dirt area in our front yard that is NOT THE GARDEN that the cat could use. Boo Figacat!
Posted by katina at 12:11 AM No comments: