1. I would like to plant Garlic for next year. After reading Vertie's blog, I think I will order some. This is only dangerous because I've got 80 billionty seeds that I bought in the spring...and most of them are winter plants. I forsee building another raised bed in the near future. Good thing Bob gave me brackets to make 2 beds.
Update: I will be planting some garlic. I just ordered some from the place Vertie got hers last year.

2. Does anyone know if beets, broccoli, and garlic grow well together?

3. I keep meaning to post about my yard art, but always forget. 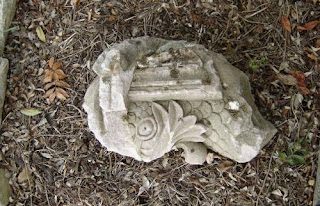 I found this while doing some field work for my job. No, I did not take it out of anyone's yard. It was sitting at the bottom of a creek. Instead of going through the hassle of writing out a work ticket to have the field crew come out and remove it, and then go and put it in the dump, I decided I'd haul it up the bank and then take it home. This thing is HEAVY. I don't know how it ended up in the creek (okay, that's not true, I do--someone threw it into the creek), but it does worry me some that its brother was in the same creek, but at a different place (about 20 yards away)--did the previous owners intentionally throw the blocks away at two separate locations or did the water move them? It's likely that the water flow moved them, but still, as I said, they're heavy, it is solid cement after all. Anyhow, I would like to do something like East Side Philip's Botox Lady with it, but need to find something somewhat vining for it (I actually was hoping that the scarlet flax would come back this year and so I could play around, but alas, it was not to be). I also apparently need to move this a couple feet away from where I have it now since it apparently a bird poop collector.

4. The Rock Rose and Artemesia from Bob by the front door: 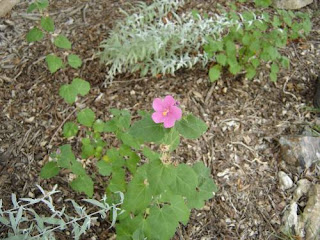 I must have put the artemesia in too shady of a spot because it's practically growing along the ground to the east. The roses, however, are flourishing. I think I'm going to put the turk's cap and mist flower over by this area as well (only they'll both be further to the east, and therefore have more sun).

5. Since Bob's told me that he'll give me a beauty berry bush, I've been contemplating where to put it--do I put it over by the turks cap in the backyard, or do I pull out the invasive Nandina and put it there, or do I just put it on the hill area next to the Nandina and leave the Nandina in the ground? I don't know how much I'll like red next to purple, but at the same time, that's the same thing that would happen if I put it next to the turks cap. Plus I guess I'd better start thinking about where I'll put my Avocado tree. It currently sits in my office downtown, and sits right next to the window, but since they put that sun reflector stuff on the windows, it doesn't get nearly as much sun as it seems it should get...which means I probably need to put it in a semi-shady spot in the back yard.
Posted by katina at 5:33 PM 3 comments:

And another post that Wizzie would like. This particular creature is on one of the petunia plants that Bob at Draco gave me at the beginning of the spring.

I went outside at dusk to make my rounds of checking on which plants needed water. When I got to this one, I freaked out some because of the crazy green bug on the plant. Upon closer inspection, I realized it was a 'hatching' cicada and ran back inside to get my camera. 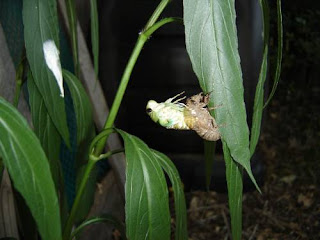 Top view. Taken 10 minutes after the above photo. Taken from this angle so you can see the wing nubs. 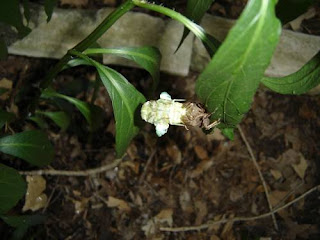 It's finally out of its shell and is waiting for the wings to fill with blood i assume (similar to a butterfly). Taken 5 minutes after the one above. 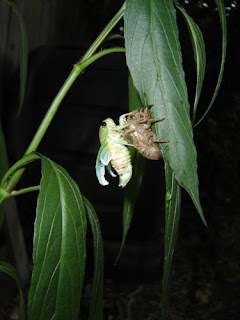 Two minutes later the wings are 'fully inflated' and it appeared that it was hanging out for its exoskeleton to harden before it flew off. At this point it was getting pretty dark out (this last picture was taken at 8:25) and I figured I couldn't wait around any longer just so I could attempt to take a picture as it flew away. But still, I'm such a nerd, I was all excited about it and made my husband come out and see as well. 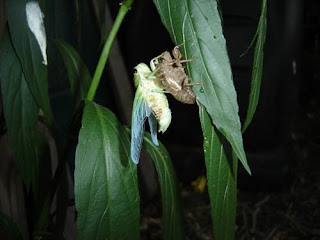 At the beginning of June, my passion vine looked like this (bat-face cuphea is between the two vines) 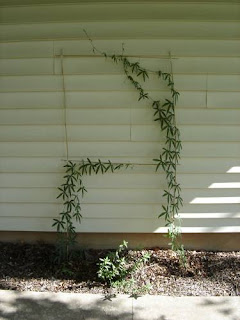 Then, these guys showed up at the beginning of July and totally denuded the right vine. 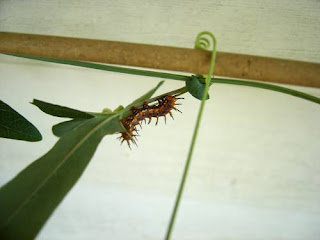 And now I've got these all over the plant. 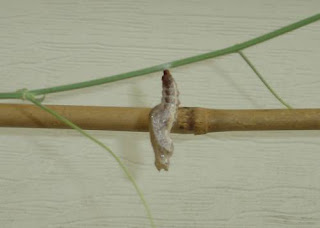 Yay! success! and it happened the first year I planted them!
Posted by katina at 5:07 PM No comments:

I've got a couple of posts' worth of pictures, so bear with me (and the 3 or 4 posts that I'm going to be making in rapid succession).

First, The garden through time: 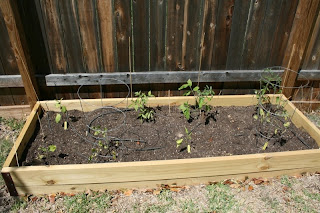 April 4, 2009. 2.5 weeks after planting everything, and having the front row damaged by a freak hail storm in late March. 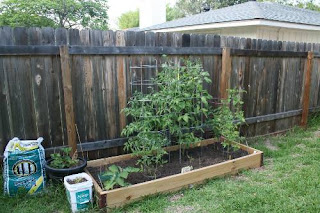 May 22, 2009. The pepper in the back is dead, the pepper in the front ain't doin' too hot. The Brandywine is the tallest, with the Krim a close second. The Eggplant looks all squat and funny. I still have strawberry plants in the black planter. 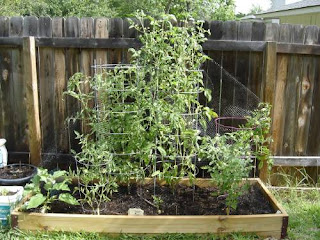 June 6, 2009. Only a two week difference from the picture above, and yet the Brandywine and Krim have grown about 1.5'. The eggplant has also grown some. I also had ripped out the strawberries and replaced them with Delicata and Butternut seeds. I also had put up the bird netting just before this picture as well. 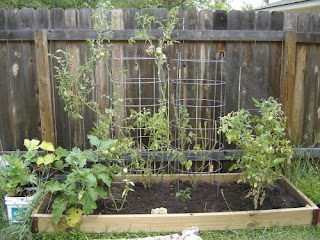 July 18, 2009. It was too depressing to take photos of the plants before I pruned them, so I just didn't. I chopped the Brandywine in half and most of the Krim--the long branches are from the Krim, they have tomatoes on them still so I left them, but when I harvest the tomatoes, I'll cut the branches down. The Krim branches that remain show that the plant was about 2' taller than in the previous photo. The Roma and Viva Italia (on the right) have filled out quite a bit from earlier, and the eggplant practically requires a tomato cage of its own. The delicata and butternut have really taken off on the left side of the picture. Oh, and you can barely make out the eggplant itself--it's the white thing above the yellow leaf on the left plant in the garden.
Posted by katina at 4:30 PM 2 comments:

Sorry for the lack of posting--we were on Vacation. Again. This time to the east coast, where I actually took some pictures of flowers and gardens and what have you at Mount Vernon, so I will probably post them here. eventually.

The neighborlady who watched the cats and garden was paid in copious amounts of tomatoes this time around (okay, maybe not copious, but at least 10 tomatoes since that's how many were ripe the day we left, plus whatever ripened while we were gone).

The garden is looking pretty pitiful.

The Brandywine is miserable, and I'll be pruning it back this weekend since the ONE tomato it had on it is now gone (I'm hoping it ripened and Cammie got it, and not the squirrels).

The Krim is starting to feel the heat, but still looks kinda decent, though leggy, it will also be pruned back.

The other three tomatoes are doing fine I guess. The eggplant and winter squash plants are actually thriving. The pepper plants are all keeping on, keeping on.

All the flowering plants look like crap except for the ones Bob gave me, the two Turk's caps I bought, and the coral honeysuckle plant. Of course the bat-face cuphea came back pretty well after watering it yesterday, and I think the bulbine plants and lantana plants will pull through as well. The passion flower was in dire need of water, but perked up after it got some.

It of course looks like crap right now because of the caterpillars. :) I don't know if it bloomed or not, but it does have cute little spikey caterpillars all over it.
Posted by katina at 6:21 PM 3 comments: