An update on the potatoes:

Today I had to go out and add some more stuff to the box as a few of the vines are about a foot tall. I made a mix of compost and mulch to add and then I hilled it around the taller vines. I guess that's a problem I hadn't thought of - if you plant different types in the same spot, they may not grow at the same rate. not a problem, I'll just have to check on them and add mulch/compost as necessary. 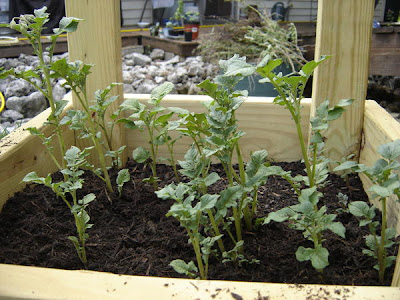 showing the potatoes growing, and after adding mulch--they're all growing toward the north (I think it's because I have an ash tree to the south so it seems, to the plants, that the strongest light is north). Please disregard my giant bucket of stuff that needs to go in the compost bin that's in the background. 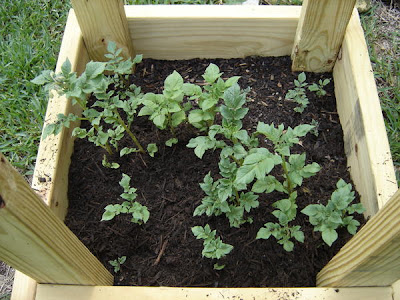 looking down on the 'tatoes. This is the same angle as when I planted them. For a comparison, see below. You can't see it in the picture, but the red lasoda potato vines have reddish veins, and the purple vikings are yellow, the all blues are TINY, but their veins are a dark purple color...which I didn't realize it before, but the eyes of the potatoes below show the same type of thing. 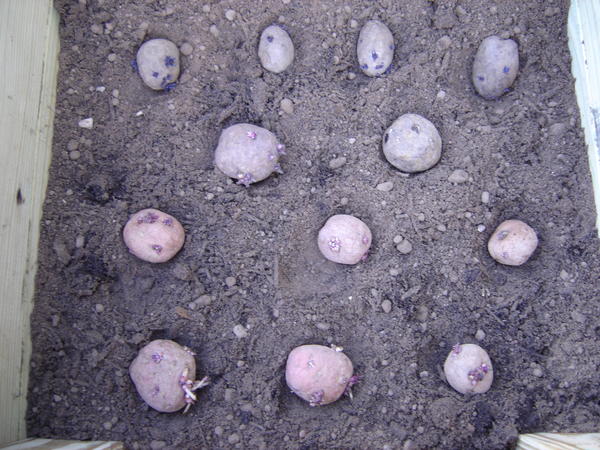 As I had approximately 8 gabillion basil plants this year, I decided that I really needed to try to do SOMETHING to preserve as much basil as possible for later use. Generally speaking, the options are freezing and drying (but oddly not freeze drying...but that may be because it requires some equipment that I don't have).

So, first, we will talk about the Drying methods:

Drying is easy to do. I had been using the dehydrator I got as a Christmas present about 10 years ago, but that still requires electricity, time, and precious counter space. Even though the dehydrator information manual tells me that basil should only take like a day or two to dry out, I've noticed that it takes longer than that--stupid humidity. So I usually let it run about a week. The biggest problem with this method is that I'm limited by the size of the dehydrator, and it takes time to pick all the basil leaves, wash them, and arrange them on the drying racks. Which brings me to drying option number 2: the hanging hook. The hanging hook is one of those hook things in the ceiling--I believe the previous owners used it for a hanging plant of some sort. 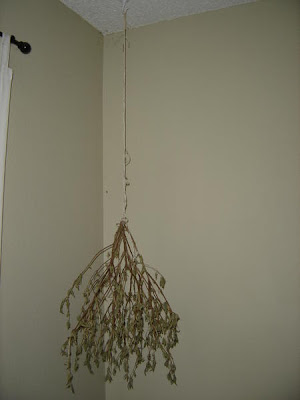 entire basil plant hanging from the hanging hook.
I use it as a place to dry all of my stuff that needs to dry before storage--onions, garlic, oregano, basil, etc. Obviously this method also has its benefits and drawbacks. Benefits: it doesn't take up counter space, it doesn't use electricity, it gets the job done, and the prep is quicker--cut off the plant at the ground, spray down with a hose, pick off all the icky leaves, use twine to tie it up to the hook. Drawback: its in my kitchen and its set up in a way that as soon as you walk in the front door you can see it hanging there.

And now we move onto the Freezing methods:

Quite honestly this will be the first year that I've done freezing of basil--it never crossed my mind prior to making spaghetti sauce from a recipe my friend Kristie gave me [note: the entry I linked to is one pretty benign, but if you read any of Kristie's other entries, I warn you now that if you have delicate sensibilities, you might get offended... she's hysterical, but still, you've been warned.]--the recipe made so much I ended up putting most of it in empty spaghetti sauce jars and then we had to eat spaghetti for 8 of the next 14 nights. And that's when Kristie told me that I could have just put the sauce in Ziploc bags and put them in the freezer. When I mentioned this to one of my other friends, she said that she normally would make pesto and then freeze it in ice-cube trays since one cube made about one serving of pesto for her. And that's when it dawned on me that while I didn't like pesto I could still do the same process with just plain basil.

Now then, I've heard of using both water and oil (never together) as the liquid for this, and I figure either will work; in fact Iris over at Society Garlic uses water instead of oil and she also has a comprehensive 'how to' on her blog. Depending on how much water you add, you may have to take that into account when adding it to your sauce, and this is probably more of a problem if you're using whole basil leaves instead of the mushed up variety like I am. Obviously if you're going to do this for pesto, you should just use the oil since I believe that's added to pesto anyway.

I worked on this throughout the day and finally came up with the quickest way to do it.
The steps are thusly:

I have found that the size of cube I make can make a double batch of spaghetti sauce, being spiced to my preference. Also, the plant I used was massive, and made 32 cubes. My friend from work also used one of her plants (which was much smaller) and it only made 4 cubes. Now then, on to the remaining 7 gabillion basil plants...
Posted by katina at 1:01 PM 1 comment: 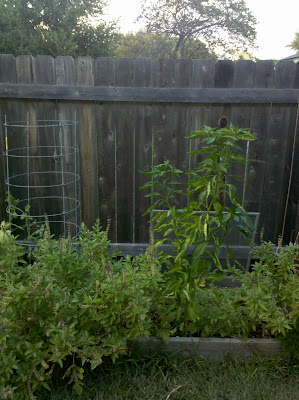 That's one of my bell pepper plants on the right. It's as tall as the 5' tomato cage. That's insane. It also has never flowered. sigh.

just to the left and right of the pepper plant are my copious amounts of basil. I think I'm going to be freezing some basil pretty soon. yeesh.
Posted by katina at 10:01 PM 2 comments: 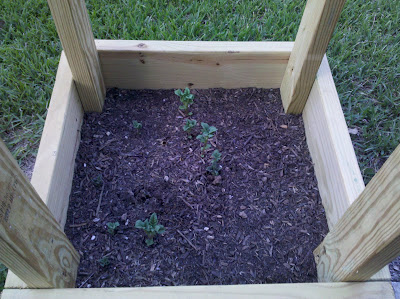 Update on the potatoes: They're sprouting.

Picture taken one side counter clockwise from the original indicator of potatoes (yeah, I know i'm not making sense. I'm standing one side to the right of the previous photo which you can see here.)

All this mostly indicates is that some of the red lasodas and possibly one of the purple vikings has sprouted. Still waiting on those all blues...
Posted by katina at 9:56 PM 1 comment: 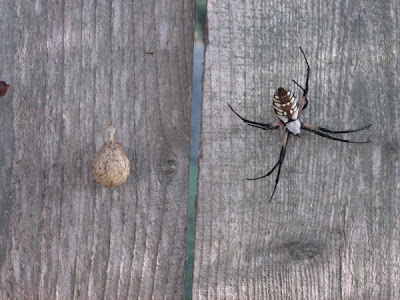 A potato box: In pictures 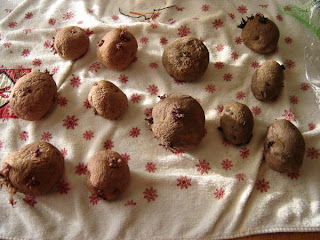 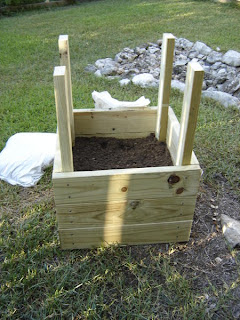 The box. 3 levels of it anyhow. boards are added as the plant grows and you fill in the box with dirt/mulch/leaves/whatever you can find that will keep it dark. 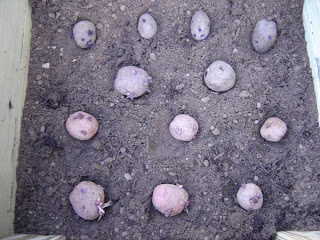 The potatoes in the dirt. I'm standing on the west side of the box (one side to the left in the above picture). From top to bottom: All blue, purple viking, red lasoda

In reality, you're supposed to place the potatoes on prepared soil that's at the bottom of the box, and only have one level of boards in place. Since I'm putting the box on top of an old tree stump, I had to put prepared soil in the box and then place the potatoes and then cover it with more dirt (thus the 3 levels of boards). The picture showing the box above is filled to the level where I placed the potatoes, I added another 4" of soil on top of that and so now I've got maybe 4" of board left. As the potato plants grow, I will add another level of boards, fill in with dirt (or more likely some type of mulch) and allow the plants to grow for as long as they will.

The reason why this is supposed to be so good is because, in theory, come harvest time, the bottom board can be pulled away, the potatoes on that level harvested, and the board replaced. A week or so later you can pull the second board off and harvest those potatoes. Repeat this "moving up" process until all the potatoes are harvested. In reality, I think it's going to be more of a just pull off all the boards on one side when it's time to harvest and harvest them all at once.

What I hope to accomplish with this experiment:
a) get more potatoes than I planted
b) harvest some potato seeds (as the plant does flower) and see if I can get them to grow plants next year. I figure this must be tough to do or something, otherwise people would be doing this instead of using seed potatoes.
c) have this still going and doing fairly well when my mom comes to visit in a month or so (she is, after all, the reason why I'm doing this experiment in the first place)

Other experiments, albeit unplanned:
I bought some sweet potatoes at the store a few weeks ago and they started sprouting. I broke off the sprouts before cooking the potatoes tonight and planted some of them in a pot of dirt.
Posted by katina at 10:12 PM 3 comments: