The queen is dead 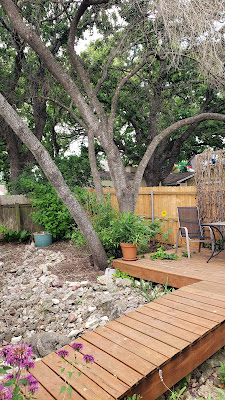 When we moved to this house in 2005, there were two Arizona Ash trees in the back yard.  The first one died a few years after we moved in when carpenter ants created quite the visible crack in the trunk which I only noticed because our cats stopped climbing the tree and I was trying to figure out why.  The thing about Arizona ashes is that they grow quickly and die off in a weird clumping pattern. Carpenter ants also don't actually kill the tree since they only remove dead wood. Our neighbors down the street had carpenter ants a few years ago on their tree, but the part they were going after was about 10' from the ground so they cut off the tree at about 8' tall and damned if that thing didn't completely regrow and form a beautiful shade tree. Naturally it got severely knocked back by the monster freeze of 2021 (winter storm Uri), which is when ours also got knocked back.  About a month ago, I noticed a bunch of saw dust on the deck and the plants around the tree and, sure enough, there were carpenter ants.  Rather than hope that the tree would pull through, especially since the most sawdust was right at the base, and because of the way the tree grew, it meant that the ants were pretty close to the bottom of the tree, we opted to go ahead and have it removed.  So we called in our Tree Guy (Ulises from Donkey Tree), and his crew came by yesterday to cut down the tree.  So now our yard looks like this: 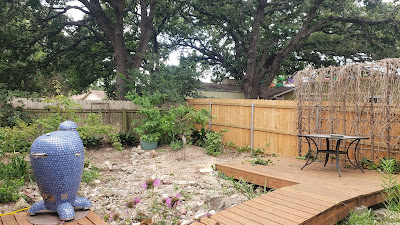 It is quite the change.  Additionally, they removed a 10-yr-old oak tree that was too close to the cedar elm and too close to the house. Removing these trees makes the yard SO MUCH sunnier, and I'm not sure the beautyberry will like the amount of sun, but the Agarita and Mountain Laurel will probably love it.  Removing the trees, however, got me looking at all the other trees I have around. I mean there's a rough leaf dogwood, which I actually hate and keep saying I'll remove, there was a Carolina Buckthorn which Shawn always complained about being too close to the house (I actually decided to remove it last night while I was talking on the phone with my sister and I was ASTOUNDED at how easy I pulled it out of the ground...which also kinda explains why it's generally not done well), the cedar elm is growing into the possumhaws, there's a live oak in the back corner which is too close to the fence and a live oak in the front yard which is probably too close to the water line to the house, and the desert willow (which is only like 3' tall) is entirely too close to the cedar elm (though may be okay if the cedar elm keeps growing and we can get it limbed up).  That's not even getting into the 2 red tip photinia that are in the yards that really need to be removed as well.

It's only funny because I've always loved how many trees we have and now I'm basically trying to figure out how to remove about half of them.